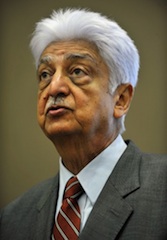 Indian software tycoon Azim Premji said Saturday he has given $2.3 billion to an education charity that he controls, reportedly the biggest charitable donation in the country’s recent history.

It is his second recent big donation after giving almost $2 billion to the charity in 2010, and came shortly after he joined the Giving Pledge club set up by Microsoft co-founder Bill Gates and billionaire investor Warren Buffet.

In Saturday’s donation, the chairman of software firm Wipro transferred shares worth $2.3 billion from the company to a trust which controls the education charity Azim Premji Foundation, a company statement said.

The billionaire, who inherited a cooking oil company and transformed it into India’s third-biggest outsourcing services firm, said the trust will use the funds to scale up the foundation’s activities “significantly”.

The charity seeks to boost the quality of India’s overstretched education system by improving teacher quality and setting up model schools.

The Business Standard newspaper and other media reported it was the biggest one-off donation to charity in India in modern times.

The media-shy tycoon is India’s third wealthiest individual with a net worth of some $16 billion, according to a 2012 Forbes rich list.

Premji, whose trust funds initiatives including rural education and teacher training, has long promoted education as a way to tackle India’s deep poverty.

He told a recent World Economic Forum in Davos that “education is perhaps the most powerful enabler of human life and equity”.

A few days ago, he became the first Indian to join the Giving Pledge club, which encourages the world’s wealthiest to donate at least half their fortunes to charity.

Those who are “privileged to have wealth should contribute significantly to try and create a better world for the millions who are far less privileged,” Premji said when joining the club.

The billionaire’s donation comes amid growing disquiet in India about the yawning divide between the country’s burgeoning wealthy class and the hundreds of millions still living in deep poverty.

A 2012 report on philanthropy by global consultancy Bain noted a “striking imbalance” in India, noting it was home to one of the world’s fastest-growing wealthy populations but also one in three of the world’s malnourished children.

While the report noted that philanthropy was on the rise, it added there was “significant room for improvement if India is benchmarked against the US, one of the world’s leaders in private giving”.

With Premji’s latest donation, his educational charitable trust’s shareholding in Wipro will go up to nearly 20 percent.