After three previous failed attempts, the ruling Peoples Democratic Party on Monday succeeded in choosing a Chairman for its Board of Trustees, BOT with  Chief Tony Anenih emerging as the consensus candidate for the position.

Anenih, popularly known as Mr. Fix It was chosen  at a meeting of the party at the presidential villa in Abuja attended by President Goodluck Jonathan, Vice President Namadi Sambo, Senate President David Mark, House of Representatives Speaker, Aminu Waziri Tambuwal, PDP chairman, Alhaji Bamanga Tukur and the Secretary to the Government of the Federation, Anyim Pius Anyim.

Anenih, who also chairs the Nigeria Ports Authority board, is generally believed to be President Jonathan’s choice for the position. His emergence therefore signifies that forces loyal to the presidency are taking hold of the party ahead of the 2015 general election.

But it was also learnt that the process of Anenih’s emergence was also enhanced by the report of a verification committee led by Prof. Jerry Gana set up to streamline the membership of the board during its last meeting. 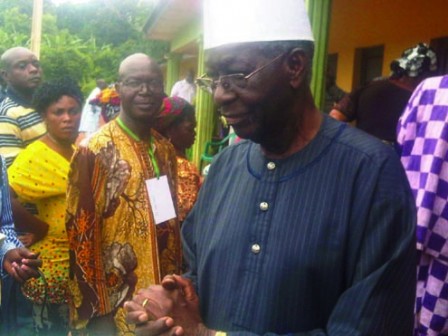 Reports indicated that the Committee in its reports recommended that party members who had previously decamped to others parties should cease to be members of BOT. This recommendation is believed to be targeted at former Vice President Atiku Abubakar who decamped to the then Action Congress to contest the 2007 presidential election.

Also, some members believed to be loyal to former President Obasanjo who was believed to be supporting Ahmadu Ali, former Chairman of the PDP were also recommended to be booted out of BOT.

In a statement, the party described the unanimous election of Chief Tony Anenih into the office of Chairman of the Party’s Board of Trustees (BOT) as a bold step towards ensuring peace and harmony within the ranks of the Party.

Olisa Metuh, the PDP National Publicity Secretary who signed the statement expressed confidence that Chief Anenih’s antecedents will contribute to the long term stability of the Party.

“Chief Anenih’s tireless participation and critical role in the formation of the PDP places him in good stead to provide wise counsel and direct the influential Board of Trustees to follow the noble ideals of the founders of the Party. His wealth of experience and acclaimed reputation as a democrat and consensus builder are assets that the Party needs at this critical point in our democratic evolution”.