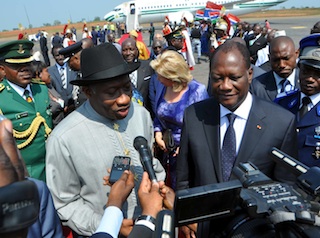 Jonathan and Quattara at Yamoussoukro

President Goodluck Jonathan will on Friday address the Cote d’Ivoire National Assembly as part of his three-day State visit to the country.

Nigeria’s Ambassador to Cote d’Ivoire, Mr Kayode Obajulu, disclosed this in an interview with the News Agency of Nigeria in Yamoussoukro, the country’s administrative capital.

Jonathan arrived in Cote d’Ivoire early on Wednesday to participate in a two-day Summit of the ECOWAS Authority of Heads of State and Government in Yamoussoukro.

Obajulu said the president would also address an economic forum made up of Nigerian and Ivorian investors.

He said the forum would give investors from both countries the opportunity to interact.

According to the ambassador, the state visit had been long overdue and that Ivorians, and Nigeria community in the country are in high spirit to receive the president.

“The host is full of expectations because it is a special visit for them; the Ivoirians are going to come out in large numbers and the president will address their national Assembly.

“There will be an economic forum where Nigerian and Ivorian investors will interact. The president will declare open and address the forum on Saturday,’’ he said.

Obajulu said the visit would take the president to a number of places including the Ivorian city hall where he would be given the key to the city.

He said Jonathan would also visit the Basillica of Our Lady of Peace of Yamoussoukro, a Roman Catholic minor Basilica constructed between 1985 and 1989 at the cost of 300 million dollars and consecrated by Pope John Paul II on Sept. 10, 1990.

Similarly, the Ambassador said the president would lay a wreath on the tomb of the first President of Cote d’Ivoire, and would be hosted to a State Banquet.