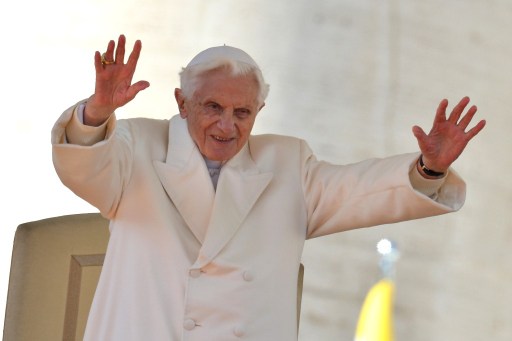 Pope Benedict XVI on Thursday vowed “unconditional obedience” to his successor on his historic final day as leader of the world’s 1.2 billion Catholics, when he will become the first pontiff to resign since the Middle Ages.

“Among you there is also the future pope to whom I promise my unconditional obedience and reverence,” the pope said as he bade farewell to cardinals in the Vatican’s ornate Clementine Hall.

“Let the Lord reveal the one he has chosen,” said the 85-year-old pope, wearing an ermine-lined red stole over his white cassock.

“We have experienced, with faith, beautiful moments of radiant light together, as well as times with a few clouds in the sky,” Benedict said, reprising a theme from his adieu to some 150,000 pilgrims in St Peter’s Square on Wednesday.

The cardinals with their black cassocks and red sashes then took turns bidding farewell to the pontiff, kissing his gold papal signet ring according to time-honoured tradition.

Many doffed their berettas in a sign of deference.

Just hours remained before Benedict will make history as only the second pope to resign of his own free will in the Church’s 2,000-year history.

The German pope stunned the globe when he announced on February 11 his surprise decision to step down, saying he no longer had the “strength of mind and body” to carry on in a fast-changing world.

“I took this step in full awareness of its gravity and novelty but with profound serenity,” the pope said Wednesday.

The theologian pope — a shy academic who struggled with Vatican infighting and a raft of toxic sex abuse scandals — said his eight-year pontificate had seen “sunny days” and “stormy waters”, but he added: “I never felt alone”.

The Vatican has said that the moment the pope’s powers officially expire at 1900 GMT, the ex-pontiff will formally be known by the new title of “Roman Pontiff Emeritus” although he will still be addressed as “Your Holiness Benedict XVI”.

The only other pope who resigned by choice was Celestine V, a humble hermit who stepped down in 1294 after just a few months in office out of disgust with Vatican corruption and intrigue.

Once Benedict takes up permanent residence in a former convent on a hill within the Vatican walls, the Church will find itself in the unprecedented situation of having a pope and his predecessor living within a stone’s throw of each other.

Vatican analysts have suggested his sudden exit could set a precedent for ageing popes in the future, and many ordinary Catholics say a more youthful, pastoral figure could breathe new life into a Church struggling on many levels.

But Australia’s top Catholic, Cardinal George Pell, said he was concerned at the implications.

“People who, for example, might disagree with a future pope, will mount a campaign to get him to resign,” Pell told Australian television.

Pell, who will help choose the new pope as one of 115 “cardinal electors” expected at next month’s conclave, also criticised the outgoing pope, saying the departing pontiff was a “brilliant teacher” but “government wasn’t his strong point”.

From Catholic reformers calling for women clergy and for an end to priestly celibacy, to growing secularism in the West and ongoing scandals uncovering sexual abuse by paedophile priests going back decades, the next pope will have a tough agenda.

French cardinal Jean-Pierre Ricard, one of the electors, spoke of the upcoming conclave in an interview with Italian daily Il Messaggero saying: “Our eyes will be turned on the conditions of the world, to the great challenges the Church faces.”

According to Church rules, any Catholic adult male can be elected pope — but the last non-cardinal to land the top job was Urban VI in the late 14th century.

The run-up to Benedict’s historic resignation has been filled with emotion and drama but his departure will be surprisingly low-key for the Vatican.

Benedict will have a small parting ceremony with some of his staff in a Vatican courtyard at 1550 GMT and a few minutes later he will board a white helicopter emblazoned with the papal insignia from the Vatican grounds.

The soon-to-be former pope will see the Vatican City — the world’s smallest state — from the sky one last time as its sovereign ruler and fly to the 17th-century papal residence of Castel Gandolfo on a rocky outcrop near Rome.

There the pope will begin a quiet life of prayer and academic research.

Within a couple of months, he is expected to return to the Vatican.

Benedict has said he will live “hidden from the world” but the Vatican has said he could provide “spiritual guidance” to the next pope while not intervening directly in Church affairs.

After eight difficult years, some of the pope’s parting words in recent years have been harsh.

At his last public mass in St Peter’s Basilica, he condemned “hypocrisy” and “rivalry” in the Church.

“The face of the Church… is at times disfigured,” he told a tearful congregation. “I am thinking in particular of sins against the unity of the Church.”