Jonathan presented with keys to Yamoussoukro 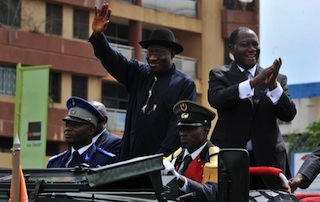 Nigerian President Goodluck Jonathan (L) and his Ivorian counterpart Alassane Ouattara wave to the crowd on March 1, 2013 during a visit to Yamoussoukro. AFP

President Goodluck Jonathan pledged Friday in Yamoussoukro, Ivory Coast, that he will continue to work with President Alassane Ouattara and other leaders of the Economic Community of West African States (ECOWAS) to achieve greater peace, security, political stability and economic prosperity in the sub-region.

Speaking at the City Hall after being presented with the keys to the city by its Mayor, Konan Ouanigbe Jean, President Jonathan said that African leaders must carry on doing their best to foster greater political stability and accelerate economic growth within their countries and across the continent as no significant progress can be attained without stable governance structures and stronger national economies.

President Jonathan who formally began his State Visit to Cote D’Ivoire earlier in the day noted that there was an intrinsic link and a symbiotic relationship between political stability and economic development.

The President thanked the Mayor and people of Yamoussoukro for honouring him and the First Lady, Dame Patience Jonathan with the freedom of the home town of late President Felix Houphouet-Boigny who he described as “one of Africa’s greatest sons”.

Noting that Nigeria and Cote D’Ivoire already have excellent bilateral relations, President Jonathan assured the people of the city that he will work in partnership with President Ouattara “to bring our two countries even closer politically and economically”.

He welcomed the offer of admission by the elite Felix Houphouet-Boigny National Polytechnic in Yamoussoukro to 50 Nigerian students in the next academic year as a further gesture of friendship, saying that the Federal Government will sponsor at least one student from each state of the nation to take up the offer.

The President had after a colourful welcoming ceremony in the city, proceeded to lay a wreath at the burial vault of late President Houphouet-Boigny.

Formal bilateral talks will be held between Nigerian and Ivorian government delegations in Abidjan tomorrow. President Jonathan will also address the Ivorian Parliament there and meet with Nigerians resident in Cote D’Ivoire before returning to Nigeria later in the day.

NAN reports that Ivorians trooped out in their thousands and lined the streets to welcome Jonathan and his entourage.

out in their numbers in different uniform to welcome the president. Business was also paralysed as shops and other business premises along the major streets of the city were locked.

NAN reports that the ceremony commenced at about 10 a.m local time (11 a.m in Nigeria) a with military parade, 21 gun salute and the inspection of a military guard mounted in honour of the president.

Jonathan and his host, Quattara, thereafter mounted an opened-roof limousine motorcade standing with a long convoy which drove slowly through the major streets of the city.

Ivorian who had lined up along the route spanning over five km hailed both leaders who in turn waved in admiration from the open car. Ahead of the convoy were Police power bike outriders, racing with speed and with various displays to the admiration of the crowd.

NAN reports that on arrival at the city Hall, Jonathan was presented with ceremonial keys to the city by the Mayor of Yamoussoukro, Konan Ouanigbe-Jean symbolising citizenship and unfettered access to the country.

The president and his wife were honoured with the freedom of Yamoussoukro, the home town of the late first

Jonathan, thereafter, proceeded to lay a wreath at the burial vault of late President Houphouet-Boigny.

The entourage, thereafter, proceeded to the Basilica of Our Lady of Peace of Yamoussoukro, a major monument

and tourist attraction in the city.

The Roman Catholic minor Basilica was constructed between 1985 and 1989 at the cost of 300 million dollars and consecrated by Pope John Paul II on Sept. 10, 1990.

A school teacher, Mousssa Samake with fair knowledge of English language told NAN correspondent in an interview that Jonathan deserved the honour, accorded him for championing the cause of peace in Cote d’Ivoire.

Samake said they trooped out to welcome the president as a mark of appreciation for helping the country to end the political crises which engulfed the country after presidential election.