Fashola insists on clean up of Ladipo auto parts market 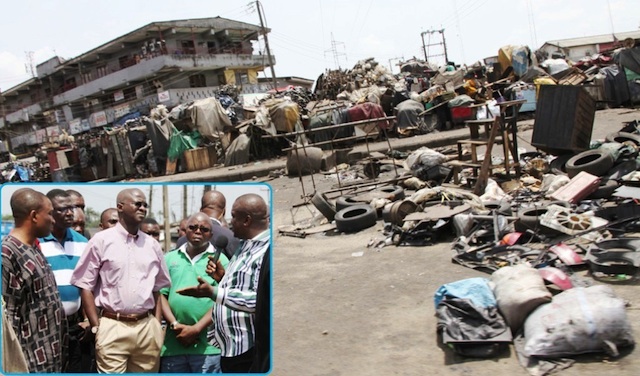 What an eye sore!: Governor Fashola at the Ladipo market today

Lagos State Governor, Mr. Babatunde Fashola, Sunday undertook an inspection of Nigeria’s biggest Auto Spare parts Market, in Ladipo, Mushin Local Government Area, closed last Monday over environmental degradation, declaring that the Government would reopen it for business once the traders spearhead a clean-up exercise and formally undertake that never again allow trading take place on the road or the edges of the canal.

The market was shut in the early hours of Monday following repeated warnings and visits by the Commissioner for Environment, Mr. Tunji Bello and the Chairman of the Taskforce on Environmental and Special Offences, CSP Bayo Sulaiman, which were not heeded.

However, the Governor’s visit on Sunday to assess the situation of the Market followed pleas by the traders and the leadership of the Igbo Council in Lagos State led by Professor Anya O. Anya, who visited the State House, Ikeja last Monday to present the new Council members to the Governor.

Though no trading was going on when the Governor visited on Sunday afternoon, evidence of the environmental degradation which led to the closure could be found on the damaged roads in the area, disused piles of spare parts and the shanties used for trading on the sides of the canal.

Speaking to newsmen after the inspection during which he also addressed leaders of the traders, Governor Fashola, who described the state of the Market and its environs as “massive degradation of a section of Lagos”, however, said the good thing in the visit was that the traders had seen the lack of caution in their deed and were ready to make amends.

“It is a massive degradation of a section of Lagos and this is not acceptable. People should not carry on like this. But what is, perhaps, worthy of note is that those who are involved have seen the error of what they have done here and are ready to work with us to clean-up and I have said here that they must take the lead”, the Governor said.

Speaking particularly about the Canal in the market blocked by refuse from the traders, Governor Fashola said, “The Canal there poses a lot of danger and we are expecting heavy rains. I don’t want to come back here to pick any dead body. We built the canal and we must make it work by not trading on it and not dumping refuse in it”.

“People told me that they picked engine parts, spare-parts and other things from the canal. It must stop”, the Governor said adding that there is now an agreement between the traders and the Government to work together to clean up the place and continue with the business there.

Earlier, while addressing the leadership of the Ladipo Auto Dealers’ Association led by its President General, Comrade Ikechukwu Animalu, Governor Fashola made it clear to them that before Government would reopen the market, the traders must clean-up the place and put strategies in place to ensure that there would be no trading on the roads in the area and no reversal to the old situation that led to its closure.

“If you must trade here, you must stay behind the property line. You can see the damage you have caused to the road. We have to come back to re-do the road. Now this will be done with taxpayers’ money. It is fine that you want to do business but those who pay the money used to construct the road must also be able to use it and how do they do that if you take over the road?”, the Governor asked.

“You will clean first and when you have done it, I will come back and I will bring members of your leadership who came to me and we will say this is the agreement now. We will sign a new agreement, nobody trades on the road, it must be behind the property line. Nobody trades on the pavement, it is for pedestrians”, the Governor said.

Governor Fashola explained further, “It is in your own interest that the roads are open to vehicular traffic. We have seen the volume of vehicles that ply here, they need parts, but they cannot even get here because of the road. Also disease will come so that after you make the money you fall sick and die prematurely instead of living to an old age”.

The Governor reiterated that in order to bring sanity to the market, the traders and the government must work together adding, “You have to take responsibility. It is not only to come and clean the place and later fall back to the old situation. There is a simple problem here, it is an environmental issue. We must treat it for what it is and get on with our lives”.

Responding, the President General of the Ladipo Central Executive of the Auto Dealers’ Association, Comrade Ikechukwu Animalu, agreed that the environmental situation at the market was bad and apologized on behalf of the traders pledging that he would lead them to clean it up as well as ensure that there would be no more trading either on the road or on the canal.

Comrade Animalu, who said he came into office last year after the election by the Association, also pledged that the traders would henceforth maintain high level of environmental sanitation in the market including keeping the canal clean and free of any materials that could block the free flow of rain water.