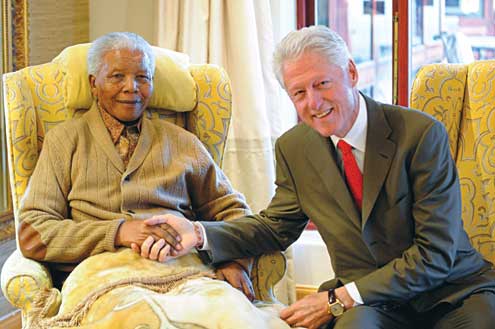 A record 259 nominees are in the running for this year’s Nobel Peace Prize — 209 individuals and 50 organisations — with the laureate to be announced in October, the Nobel Institute said on Monday.

The list is known to include Malala Yousafzai, the shot Pakistani schoolgirl-turned-icon of Taliban resistance, ex-Eastern bloc activists, and former US president Bill Clinton.

“The trend is upward, not every year but almost,” the head of the Nobel Institute, Geir Lundestad, said.

“This reflects a growing interest for the prize. The nominations come from the entire world,” he said.

The previous record dates back to 2011 when 241 candidates were nominated.

The list of nominees is kept secret for 50 years.

But thousands of people are eligible to nominate candidates — including former laureates, members of parliament and government around the world, some university professors, and members of certain international organisations — and they can reveal the names they have put forward.

As a result, it is known that Malala and Clinton are nominated, as well as Russian human rights organisation Memorial and Myanmar’s reformist President Thein Sein.

The deadline to submit nominations closed on February 1.

The five-member Norwegian Nobel Committee will announce its choice in early October, and the prize will be awarded, as tradition dictates, on December 10, the anniversary of the death in 1896 of the Nobel Prizes’ founder, philanthropist Alfred Nobel.

Last year, the prestigious honour went to the European Union, a highly controversial choice as the bloc struggles through its worst crisis since its creation.

“There’s no doubt that the choice of laureates in recent years has contributed to the increasing attention” on the award, Lundestad acknowledged.

In 2009, the prize also made waves when US President Barack Obama received the nod just months after he took office and as the US was fighting two wars in Iraq and Afghanistan.