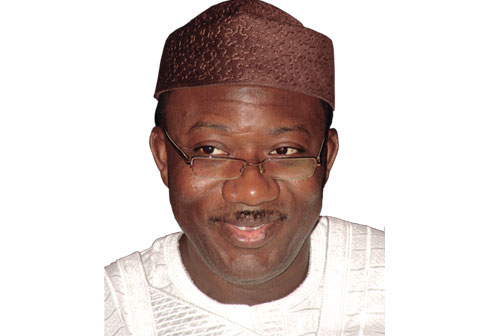 The rumblings in the Peoples Democratic Party get messier as the Nigerian Governors’ Forum, NGF is sucked in

The issue, which has been sensationalised in the media, had President Goodluck Jonathan and PDP National Chairman, Bamanga Tukur, as the leading dramatis personae. Also recruited for the plan are a few governors, led by Governor Godswill Akpabio of Akwa Ibom State and the governor of the President’s home state, Seriake Dickson. The mission of the anti-Amaechi group, including senior Presidency officials and ministers, was to remove him, based on his perceived political ambition and unfriendly disposition to Jonathan. The permutation was to cut Amaechi to size by edging him out and consequently curtailing his rising influence within the privileged Forum.

Prior to last Monday’s NGF meeting held at the Rivers State Governor’s Lodge, Asokoro, Abuja, it was reported that a slew of Amaechi’s colleagues had a parley with Jonathan, where he lamented the hostile posture of the Rivers’ governor towards him. Jonathan was said to have backed up his charge against Amaechi with a video clip in which the latter threatened him.

A PDP governor who attended the Governors’ meeting penultimate Sunday and spoke to this magazine on condition that he would not be named, expressed dismay at the tactics adopted by the Presidency in its attempt to oust Amaechi from the leadership of the NGF. One was to create a splinter group which would be headed by a ‘loyalist’ from among PDP governors. The method adopted was for a group of presidential aides to meet each of the governors individually and try to convince him of the need for unity among them. If the governor agreed to such proposal he was asked to sign the document, without telling him it would form the basis for Amaechi’s sack as NGF’s chairman.

The governor further condemned the Presidency’s desperation to unseat Amaechi by carrying its campaign even into the venue of the governors’ meeting with Jonathan. At a point, PDP governors who expressed unwillingness to cooperate with the Presidency were threatened with sanctions.

So sure was the Presidency that Amaechi would be removed that a top aide to Jonathan dispatched text messages to State House correspondents to “expect breaking news” at the end of the governors’ meeting with the President.

But it ended up a shameful misfire. One major reason said to have caused the plot to fail was the inability of the anti-Amaechi elements to secure a comfortable majority to seal the deal. The reported persuasion by Governor Kayode Fayemi of Ekiti State that the election of a new chairman be deferred to May when Amaechi’s initial  two-year tenure would end also saved the day. Not done, a Plan B, which was to decimate the rank of the NGF, was hatched, leading to the formation of the PDP Governors’ Forum, headed by Akpabio.

According to Akpabio, the new Forum was formed to X-ray the state of affairs of the PDP as well as take steps to set up structures to combat the emerging challenge of the new opposition party, All Progressive Congress, APC, among other things. Despite the reasons given, the real intention of the new Forum was indirectly unmasked by Akpabio last Tuesday. He said the need to save PDP from implosion necessitated the creation of the parallel Forum. “What the PDP is trying to do now is to cleanse its house, to try to identify the ones called the Judas and whisper to them: ‘go out’.”

Akpabio did not stop at that. He likened PDP to a moving train that would crush anyone standing in its way. Akpabio’s expletives were explicit and the direction to which they were hurled well-known. Jonathan, who recently has had to endure some bashing from Amaechi over a number of issues in which they both have interests, became more intolerant of the latter since his rumoured ambition to stand as a vice-presidential candidate to Governor Sule Lamido of Jigawa State in 2015.

On this score, some of the President’s kinsmen took up the gauntlet against Amaechi. Firing the first salvo was the Minister for Niger Delta Affairs, Elder Godsday Orubebe, who expressed anger at Amaechi’s demand that the Federal Government hands off the East-West road which has become an agony to travellers. Orubebe lashed out at the governor, accusing him of trying to make cheap political capital out of the issue by making the Presidency look incompetent. He also accused Amaechi of using state funds to promote his purported political ambition.

It would be recalled that last October, Amaechi publicly protested the decision by the Revenue Mobilisation, Allocation and Fiscal Commission, RMAFC, to cede some oil wells located in Soku communities in Akuku-Toru Local Government Area of Rivers State to the Nembe Kingdom in Bayelsa State. The incident degenerated into protests by the chiefs and people of the affected communities in the state and Abuja. Amaechi accused the President and Dickson of being in the know of RMAFC’s decision. To this, Dickson squared up with Amaechi, accusing him of mischief and of passing misleading information to the public on the matter. He also accused Amaechi of disrespecting Jonathan, as well as inciting Rivers people against the president.

Ironically, the people living in the controversial communities on both sides of the divide are Ijaw, the President’s clan. Another sin perceived to have been committed by Amaechi was his position on the Excess Crude Account and Sovereign Wealth Fund, which was jointly taken by all  the governors but fell on Amaechi’s shoulders to champion.

Meanwhile, with incontrovertible proof that Amaechi enjoys the support of the majority of members of the NGF, the Presidency is said to have decided to restrategise and deferred its plot to unseat the Rivers governor till May, when the next election of an NGF chairman is billed to hold.