Insight: The Show of Shame in Ogun House of Assembly 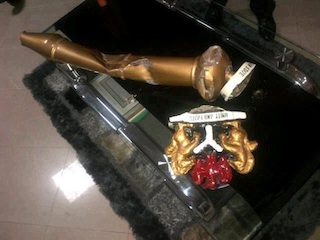 The House of Assembly in the western Nigerian state of Ogun literally turned a bedlam today as legislators abandoned the decorous rules of the house for a shouting match and distemper.

What triggered the commotion was the announcement by the speaker of the suspension of four members of the house for various offences, including ‘disrespecting the institution of the House and the Speaker’.

By coincidence, the purportedly suspended members had staged a walk out on the speaker when he allegedly tried to impose his deputy, Tola Banjo as chairman of Assembly Tender’s Board.

The suspension was inchoate,: the motion must be endorsed by a member and a vote taken to seal it.

The Majority Leader of the Assembly, Mr. Israel Jolaoso moved the motion for the suspension of the four members and the Speaker called for a member to second the motion, but before any member could signify his intention to do so, some
of the affected members advanced towards the mace and broke it.

When it dawned on the speaker that the suspension process needed to be consummated to be valid, he frenetically slammed the gavel to call for order.

He was completely ignored. Worse, the supporters of the members listed for suspension began to make jest of him for his alleged ineptitude.

As he tried to comprehend the disintegration of the House, what he could hear was a cacophony of “power resides
in people…”, being chorused by some members of the Assembly, with a partially broken mace held by one of them. There were 14 members of the house in the rebellious group.

The rebellious lawmakers claimed they reconvened and nominated Remmy Hazzan as the Speaker pro- tempore.

Their own emergency session yielded a counter response: the suspension of those who have suspended four members of their group. This time, the Remy Hazzan group also suspended four members in the ‘Speaker’s ” camp: the Speaker, Surajudeen Ishola Adekunbi, his deputy, Tola Banjo, the Majority Leader of the House, Israel Jolaoso and Olakunle Oluomo.

All square: four members suspended; four other members counter-suspended. But the matter did not end there.

The Pro- tempore Speaker addressed the House about their counter plenary session where he said the earlier pronouncement of the substantive Speaker has been upturned.

The motion was moved by Olusegun Elemide from Odeda Constituency and was seconded by Samson Onademuren from Ijebu Nort-East.

It was plainly a show of comedy in the hallowed chambers of the Ogun House for most of today.

There was palpable fear early today that the House would run into storm because of the widespread speculations that some members were going to be suspended and this became more certain when a close ally of Governor Ibikunle Amosun posted it on his Facebook timeline late last night that , “tomorrow is another day for the test of power in the Ogun
House of Assembly! Let’s see who carry the day! Ina Esinsin kii jo ni Leemeeji!”.

The show of shame in the House reportedly made a concerned Governor Amosun to abandon the 76th birthday ceremony in Abeokuta for former President Olusegun Obasanjo.

It was not clear whether he held a behind the scene peace session with the warring members.

But the Chairman House Committee on Agriculture and Forestry,Adeyemi Harrison representing Ogun Waterside told newsmen that the Assembly would reconvene later in the day to complete the plenary session of the day.

When he was asked about the mace they would use when they reconvene, the politician blew his top and manhandled the Chairman of Nigeria Union of Journalists, Correspondents’ Chapel, Mr. Kehinde Akinyemi of Daily Trust
newspapers.

Journalists were eventually tear gassed out of the Assembly premises to prevent them from asking the suspended Speaker questions as he holed up in his office when newsmen came calling.

Later in the day, Remy Hassan kicked when the House wanted to reconvene and journalists were asked to stay outside.

Later, journalists were allowed to witness the resumed session, after being subjected to body search.

To the amazement of everyone, the ‘suspended’ Speaker, Surajudeen Ishola Adekumbi appeared with a mace, followed by some lawmakers and entered the chambers.

It was another round of hot verbal exchanges as the Speaker directed journalists to move out from the hallowed chambers.But the order was countermanded by ‘Speaker Pro tempore, Remmy Hassan and his group.

The altercations degenerated as lawmakers hurled unparliamentary adjectives against one another.

Hurriedly, Adekunbi announced that the adjournment of House till Wednesday. Their exit from the chambers was greeted with jeers.

Speaker pro-tempore, Remmy Hazzan affirmed to newsmen afterwards that the quartet remained suspended and the House is adjourned indefinitely.

Hazzan also narrated the cause of the dispute to the newsmen, saying they were seen as rebels, because they were trying to avoid the lawlessness that occurred in the last dispensation.

“We resolved in this hallowed chamber that we will not accede to any borrowing until we are sure of the quantum of our debt and that the debt should not outlive this administration. The laws we had passed in the Assembly concerning borrowing is just the mechanism for borrowing. It is clearly stated in that law that before any bond could be raised, it would need 2/3 majority of Assembly. A government that cannot even get simple majority, where would they get the 18 and that is the crux
of the matter. They want to now remove some of us who are not in support of this process, so that they can do an
amendment to that law to change the 2/3 to simple majority so that at their whims and caprices they can approve anything even in their bedroom. That is not right.”

“No, Ogun State will not go back to those dark days. No loan would exceed the life of this administration in repayment. Let everybody know and let all financial institutions know that any jankara resolution authorising any loan, the same fate that befell FCMB will befall that particular financial institution. In the last administration, quite a number of
the loans that FCMB granted had no legislative consent and this administration has refused to pay, because they don’t have legislative approval. It is the same thing that we are saying now. Let it be known to everybody out there; we are going to make several publications about that. That is our stand and we stand by it”, Hazzan said.

On the suspension of the quartet,the former deputy Speaker said: “Suraj Adekumbi, Tola Banjo, Israel Jolaoso and Kunle Oluomo are on suspension. The suspension that is standing on this floor is the suspension of those four. The one that was done illegally earlier has been reversed by a sitting that many of you witnessed. On decision of that, take it for us, God helping us, we are in charge. The adjournment we had is sine die”.

“On the strength of that, we call on all security agencies to adhere to this, because feelers we are getting from our various constituencies is that all of them are mobilizing to challenge this shenanigan that went on earlier in the day. We call on all security agencies, Police, Civil Defence, SSS to lock up these premises until we are sure of relative peace for the business of the House to continue”, he declared.

Hazzan called on the security agencies to keep tab on a lawmaker whom was alleged to have been in posession of arms while in the assembly.

“We are also asking security agencies to place Hon. Adeyinka Mafe on serious watch because just now we discovered that he was bearing arms while inside the chamber, and they were the first to accuse us of gun running. We fight with power of mouth and intelligence in our heads, we don’t fight with violence”.

Hazzan disclosed that the House will write all financial institutions through its Public Account Committee to outline the financial stand of the state, promising to report back to the public.

“Public Account Committee is headed by one of us, Abiodun Akovoyon. We are urging you to write all the banks to furnish us with the statement of accounts of the movement of funds in this House so that we will know who is pilfering our money and we will feed you back on our findings. The information has already been passed on to Abuja, the DG, SSS is aware, IG is aware; the Minister of Police Affairs has been briefed. Some of us are also very close if they think they have
the governor, we also have the president. And this is a nation and not a banana republic,nothing of what happened before would repeat in this session” he stated.

Reacting to the allegation by the Remmy Hazzan lawmakers, Suraju Ishola Adekunbi disclosed that his faction is in control and they will reconvene tomorrow in the House.

“All what they are saying is not true. What I want to say is that the quartet of Remmy Hazzan and others remain suspended and we shall sit tomorrow in the House by 11am”.