Will a city rising from the sea turn the tide for Nigeria? 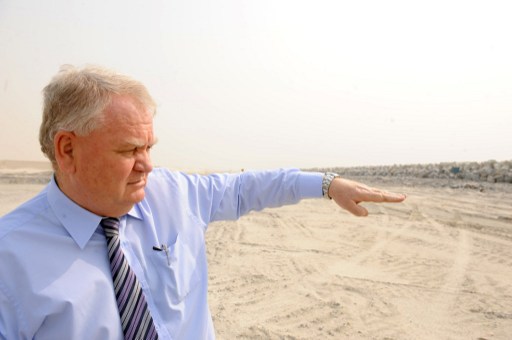 LAGOS (AFP) – A Nigerian city is rising from the sea, swelling the country’s hopes of one day turning back the tide of negative impressions and serving as a showcase to the world.

The massive project taking shape along the coast will see a new, privately run city built on land reclaimed from the Atlantic Ocean.

However, the Dubai-like project, called Eko Atlantic, is not without controversy since it will be privately administered throughout, including providing its own security, steady electricity supply and clean water.

Such services are largely unavailable to average Nigerians, with the government so far unable to provide them reliably in a country that ranks as Africa’s most populous nation and largest oil producer.

Construction on the edge of Lagos, Nigeria’s largest city, has drawn high-profile attention, with ex-US president Bill Clinton among dignitaries at a recent ceremony marking the halfway point of land reclamation.

Gilbert Chagoury, one of the powerful businessmen behind the project, has contributed between $1 million and $5 million to the Clinton Foundation, its online records show.

Developers say the 10-square kilometre city, expected to be home to some 250,000 people, will restore the coastline to where it was before erosion gradually peeled it away.

Land reclamation began in 2008 and work is now far enough along that it is possible to envision a city rising from what used to be the sea. Some five square kilometres of rebuilt land now stretches out like a moonscape.

Sand has been dredged from the ocean and transported to the site, protected by a giant sea wall — dubbed the Great Wall of Lagos — partly made of five-tonne interlocking blocks and designed to guard against erosion and flooding.

It will include a mix of residential and office buildings, clearly designed for an elite segment of Nigeria’s largely impoverished population.

While it will not be a gated community, it will be policed by private security with the help of strategically placed cameras.

In addition to the planned 250,000 residents, the city is also intended to serve as a workplace for another 150,000 people.

The developers are South Energyx Nigeria Limited, a subsidiary of the Nigeria-based Chagoury Group, a sprawling industrial and financial empire run by a family of Lebanese origin with major influence.

The multi-billion dollar project in some ways resembles those carried out in places like Dubai, where islands have been constructed from reclaimed land and developed.

David Frame, head of South Energyx, said plans called for it to be privately administered since it needs to be constructed according to international standards to attract global investment.

While it has been promoted as a signature project for the country and for Lagos, a city of some 15 million people, activists have questioned whether it will stand as another symbol of the gap between a corrupt elite and the masses of poor in Nigeria.

Most in the country of 160 million people continue to live on less than $2 per day and eke out a living where they can. Some expressed hope that the project would lead to other forms of development to benefit average Nigerians.

“We cannot hand over the development of Nigeria to individuals and to private agents.”