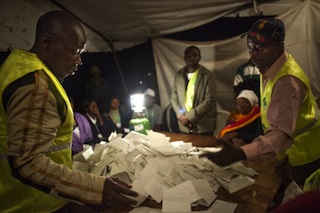 With counting continuing into the second day since polls closed, partial results put Uhuru Kenyatta — who faces an international trial for crimes against humanity over violence after the last elections — in the lead.

Kenyatta, the deputy prime minister, has maintained a steady lead in partial results over rival Prime Minister Raila Odinga, but political parties on both sides have raised concerns at delays in the tallying process.

Odinga says he was robbed of victory in 2007 when disputed results triggered bloody ethnic violence in which more than 1,100 people were killed and 600,000 were forced to flee their homes.

While millions of Kenyans turned out peacefully on Monday for the elections, how they react to the final results will be key to stability in the regional powerhouse. Leaders and election officials have urged people to remain calm.

Kenyatta had won just over 2.82 million or 53 percent of valid votes cast against Odinga with 2.23 million or 42 percent, a gap that could still be overturned.

More than five percent of votes cast were rejected, and those were not initially included in total tolls.

If these spoiled ballots were included, it would greatly add to the numbers needed for a candidate to break the 50 percent threshold for a first round win, raising the prospect of another round due within a month after the vote.

Kenya’s Daily Nation in its Wednesday editorial warned that despite largely peaceful holding of polls there was a potential “rocky road” ahead.

“Election-related violence last time occurred not during the peaceful voting and counting, but in protest after the announcement of suspect results following lengthy unexplained delays,” it noted.

Despite appeals by leaders for patience, in the western town of Kisumu, an Odinga stronghold and flashpoint in 2007-8 violence, concern was growing.

“It’s taking a long time, let’s hope that they are not doing something fishy,” said airport worker Jack Mwai.

There have already been multiple complaints at the widespread failure of electronic biometric voting registration (BVR) kits introduced by the Independent Electoral and Boundaries Commission (IEBC) to frustrate potential rigging.

The failure meant stations used paper records and manual registration, and many returning officers were due to travel by road Wednesday to deliver results by hand.

Sitting in the near empty hall at Kisumu county tallying centre, returning officer Dolly Akili was waiting for results for one final constituency.

“Then I will get my security, they will take me to the airport to fly to Nairobi,” she said, adding that she hoped to travel by nightfall Wednesday.