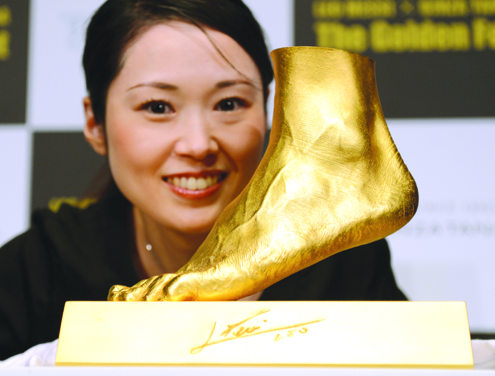 An employee of Ginza Tanaka poses beside the golden replica of Lionel Messi of Argentinas left foot during its press preview in Tokyo early today. The 25-kilogramme golden foot was created by Tokyo-based jewelry retailer, Ginza Tanaka, to commemorate Messis record-breaking Ballon dOr for four consecutive years and the world-record 91 goals he scored in a calendar year. PHOTO: AFP.

A solid gold replica of footballer Lionel Messi’s left foot, complete with blood vessels and the swirls of skin on the bottom of the toes, is to go on sale in Japan, a jeweller said early today.

The 25-kilogramme (55-pound) statue, worth $5.25 million (about N828m), was created from a mould of the star striker’s foot by Ginza Tanaka to mark Messi’s record-breaking fourth consecutive Ballon d’Or award.

The company said the golden foot is due to go on sale on Thursday, along with a number of miniature versions and a solid gold plate of the Barcelona FC frontman’s footprint, the company said.

Part of the profits from the sale will go to help people affected by the quake and tsunami that hit Japan two years ago next Monday, through the Leo Messi Foundation, a charity run by the Messi family.

Argentinean Messi won an unprecedented fourth consecutive Ballon d’Or at a FIFA gala in Zurich in January, adding yet another record to his stellar list of achievements as the top scorer in Spain’s La Liga.