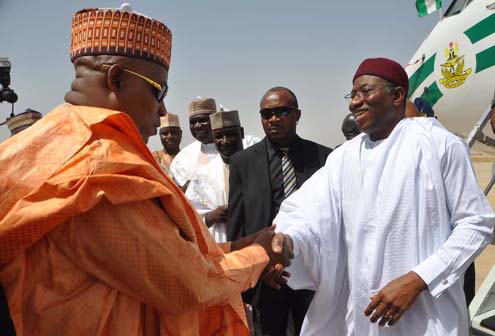 President Goodluck Jonathan (r) being received by Gov. Kashim Shettima during the President's official visit to Borno and Yobe states in Maiduguri on Thursday, 7 March, 2013

Nigeria’s president, visiting the region at the heart of an Islamist insurgency for the first time since he was elected in 2011, on Thursday rebuffed calls for an amnesty deal for the extremists.

President Goodluck Jonathan’s visit came amid mounting political pressure for him to travel to the region and followed calls this week from Nigeria’s top Islamic figure for an amnesty deal for insurgents.

Jonathan landed in Maiduguri, the capital of Borno state and considered the home base of Islamist extremists Boko Haram, and travelled by helicopter to neighbouring Yobe state, also hit by repeated attacks blamed on the group.

Security was tight, with soldiers stationed along roads and movement restricted. He is due to return to Maiduguri later Thursday for a visit that will extend into Friday.

The president said he could not rule out an amnesty deal in the future, but said that it was impossible to negotiate an agreement with Boko Haram because their identities and demands remained unclear.

“You cannot declare amnesty for ghosts,” Jonathan told an audience of politicians and dignitaries in the Yobe state capital Damaturu, broadcast live on national television.

Jonathan made reference to a 2009 amnesty deal for militants in the oil-producing Niger Delta region, where the president is from.

The deal has been credited with greatly reducing unrest in the Niger Delta, but criminality has since flourished, including the theft of crude oil on a massive scale, costing Nigeria an estimated $6 billion per year.

“In the Niger Delta, if you call them, they come and they will tell you their grievances,” he said. “But Boko Haram, I don’t see anybody who says they are Boko Haram.”

The visit came with Jonathan facing political pressure to visit the northeast, wracked by scores of bombings and shootings blamed on Boko Haram. The military has been accused of major abuses in response to the insurgency.

It is also the region where seven members of a French family were believed taken after being kidnapped on February 19 just over the border in Cameroon. They remain held by the abductors and their whereabouts are unknown.

There have been growing calls for Jonathan to visit the area. A group of opposition state governors visited Maiduguri last week, drawing further attention to Jonathan’s absence there.

Jonathan earlier in the day held talks with Yobe governor Ibrahim Geidam and was due to help commission a number of government projects.

Violence linked to Boko Haram’s insurgency in northern and central Nigeria has left some 3,000 people dead since 2009, including killings by the security forces.

The group has claimed to be fighting for an Islamic state in Nigeria, Africa’s most populous nation and largest oil producer, though its demands have repeatedly shifted.

It is believed to include various factions with differing aims, in addition to imitators and criminal gangs who carry out violence under the guise of the group.

Nigeria’s 160 million population is roughly divided between a mainly Muslim north and predominately Christian south. Jonathan, a southern Christian, has been accused by his opponents of neglecting the northeast.