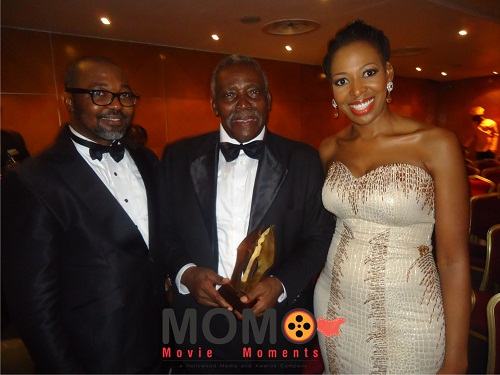 Olu Jacobs, middle, with his award

Nigeria’s Akin Omotoso may not have earned recognition from the Jury in the Best Movie Overall category, but he was a big winner on Saturday night as his movie “Man On Ground” claimed four awards, including “Best Movie Director” at the inaugural AfricaMagic Viewers’ Choice Awards ceremony held at the Eko Hotel & Suites, Lagos.

Omotoso’s flick, which is based on the xenophobic riots that broke out in South Africa in May 2008, also picked up gongs for Best Cinematographer (Paul Michelson), Best Picture Editor (Aryan Kaganof) and Best Sound Editor (Michael Botha and Joel Assaizky).

South African Sara Blecher also shared the honour as the night’s big winner with four awards as her drama film “Otelo Burning” walked away with the coveted Best Movie Overall, a repeat of her feat at the African Movie Academy Awards, AMAA, last year. The film she claimed took her eight years to produce also bagged the awards for Best Art Director, Best Make-up Artist and Best Lighting Designer.

Other winners include Mercy Johnson (Best Actress-Comedy) for her role in Dumebi-The Dirty Girl; Hafiz Oyetoro (Best Actor-Comedy) for “House a Part”.

But the king and queen of the first-ever AMVCAs were OC Ukeje and Jackie Appiah, who won Best Actor and Best Actress respectively for their individual roles in “Two Brides And A Baby” and “Best Picture”.

Accomplished actor Olu Jacobs was recognised as the first ever recipient of AMVCAs “Industy Merit Award”.

In his acceptance speech, Jacobs, accompanied to the event by his wife, actress Joke Silva, said with the award presented to him by his old friend and veteran actress, Taiwo Ajai-Lycet, he was now convinced that he has been doing things right in his career. The 71 year old actor recalled how he left Nigeria without the blessing of his parents for Britain in the 1960s and his struggles through the Royal Academy of Dramatic Arts, London, England.

Also recognised was fast rising young actress, Ivie Okujaye who was named the ‘Trailblazer of the year”.

The glamorous ceremony had Diezani Allison-Madueke, Minister for Petroleum Resources, who represented President Goodluck Jonathan and two other ministers- Edem Duke (Tourism and Culture) and Olusegun Aganga (Trade and Investment).

In his goodwill message at the event, President Jonathan appreciated the organisers of the awards ceremony, MNet Africa and MultiChoice, for putting up such wonderful ceremony to reward and celebrate talents from across the length and breadth of Africa. He assured all of his administration’s continual support for the creative industry to attain its full potential of providing entertainment and employment for millions of people in Nigeria and Africa.

One of the highlights of the night was when ace filmmaker, Tunde Kelani mounted the podium to receive the award for Best Local Language Yoruba, which he won with his latest film “Maami”. In his acceptance speech, kelani, expressed delight for the category that recognised that of ‘indigenous African expression’ especially Yoruba language spoken by over 35 million people in Nigeria, Africa and those in the Diaspora. He said as a matter of fact, it is erroneous to described it as a local language. “Who said Yoruba is a local language? Local Ko, local ni,” Kelani said to the bemused audience.

Speaking with P.M.News after the event, Biola Alabi, MD, M-Net Africa, said it has been a night of huge excitement and emotion. “It’s been a true celebration of African film and television, a fitting platform for the stars of our continent, both in front and behind the cameras,” she said.

It was indeed an outstanding night of celebration with fantastic performers from some of Africa’s best, led by Femi Kuti who opened and closed the ceremony, Tiwa Savage, Banky W, Iyanya and Kenya’s Sauti Sol. Also on stage was London-based Congolese stand-up comedian, Eddie Kadi.