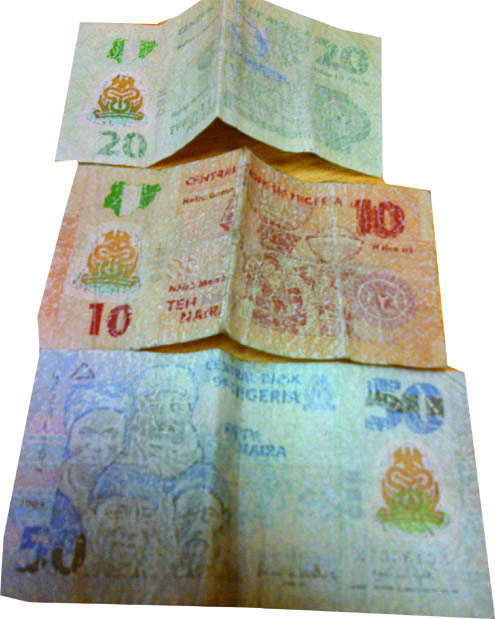 On 28 February, 2007 when the Central Bank of Nigeria, CBN, announced the introduction of polymer versions of 5, 10, 20, and 50 naira notes, many citizens hailed the novel idea.

Six years after, however, many Nigerians are now rejecting the polymer currency notes, either because it is faded to the point it can no longer be spent, or it shrinks after a while.

The CBN, under its former governor, Chukwuma Soludo, had in 2008, first unveiled the 20 naira polymer note, to test its acceptance by the public.

Nigerians warmly welcomed the new note and exchanged it with the old paper note in the same denomination, which was gradually phased out.

It was Soludo’s successor, Sanusi Lamido Sanusi, who, eventually, in 2009, released the remaining 5, 10 and 50 naira versions of the polymer currency.

But that policy decision of introducing the polymer bank notes is now being rued by many citizens, given the poor quality and short life span of the currency note, made of polythene.

In buses, stores, and markets, many people now reject some of the polymer notes, either because the currency features printed on them have faded out, or have so shrunk they look ugly.

“Government should have left us with the old paper naira that we are used to. Even after prolonged use, it (paper note) only gets dirty or torn; and one can still piece it together with an adhesive tape.

“Unlike this one (polymer) that fades out easily that you cannot even recognise again,” lamented Mrs. Okon, a fruit seller in Ikeja GRA, Lagos.

A bus driver on the Ketu-Berger route in Lagos also complained of the poor quality of the polymer notes.

“My conductor regularly quarrels with passengers who sometimes reject the faded notes, even though some other passengers were the ones who gave us the worn out notes.

“Government should just phase them out and let us return to the old paper notes,” advised the commuter bus operator.

It is not just the citizens who have issues with the polymer notes.

The CBN itself has recently admitted the currency was no longer sustainable. For that, it announced it would no longer issue bank notes on polymer, citing higher costs and “environmental issues”.

The apex bank also decries the fact that Securency International Pty Limited, the Australian firm, which prints the polymer notes, holds the patents and rights to the currency notes.

The CBN, according to Tunde Lemo, its Deputy Governor, Operations, has thus resolved to cease printing the naira in polymer notes to end the monopoly of Securency.

“Securency is the only producer of polymer currency in the world and so the CBN has been resorting to single sorting for bank note.

“This, we think, is not good for the country. Even though the plan is to coin N5, N10 and N20, the N50 note will be converted to paper currency.

“However, if Nigerians show preference for retaining the N5, N10 and N20 in banknotes instead of coins, it shall no longer be in polymer,” Lemo told reporters last year.

The CBN official also said the destruction of bank notes made of polymer has proved to be a challenge in Nigeria, due to environmental constraints.

“Briquetting (destruction of unfit banknotes) of polymer is not always easy because it is made of polythene and emits substances that are not environmentally friendly,” Lemo explained.

Aside from its poor quality, the polymer note has also been slighted by the bribery scandal linked to its manufacturer, Securency.

An Austrialian newspaper, Age, had in 2011, reported that Securency paid about N750mn in bribes to certain CBN officials between 2006 and 2008, in order to secure the contract to print polymer notes for Nigeria.

On 10 January this year, the Economic and Financial Crimes Commission, EFCC, interrogated Soludo, the CBN boss, under whose watch, the infractions were allegedly committed.

As the government seeks to unravel the mystery of the bribery claims surrounding the printing of the polymer notes, Nigerians can only wait till when the seemingly inferior currency note is jettisoned, as promised the CBN.