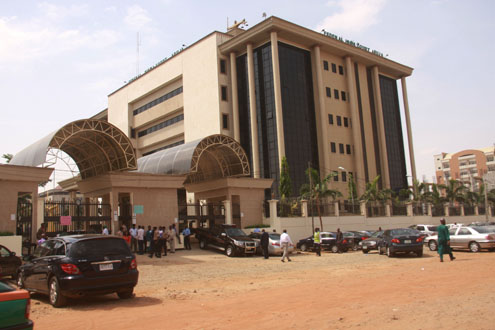 Look of the Federal High Court, Abuja gate during the strike action

All federal courts in Nigeria were shut down on Monday following the expiration of a 21-day ultimatum issued the Federal Government by judicial workers under the aegis of Judiciary Staff Union of Nigeria, JUSUN, an umbrella body of judicial workers.

The union embarked on an indefinite strike action following the expiration of the ultimatum it issued to Federal Government to issue a circular for the implementation of consolidated judicial salary structure, CONJUSS, which offers them an enhanced pay package.

JUSUN President, Comrade Marwan Mustapha Adamu, lamented that the government is merely paying lip service to the issue of industrial harmony in the justice sector and threatened that his union is in a “fight to the finish battle” with the Federal Government on the issue of enhanced salary package for their members.

Workers who showed up for work at the federal high court complex in Abuja were barred from entering the complex by members of the union’s task force mandated to enforce compliance with the union’s leadership directives to members to keep away from work.

Officials of Nigerian Prison Services which brought some accused persons from Kuje prison in Abuja were also barred from enetering the court premises while lawyers who had cases slated for today were also turned back.

But for the presence of  law enforcement officials, a scheduled seminar for judges of the federal high court organised by Nigeria Deposit Insurance Corporation, NDIC, in conjunction with National Judicial Institute, NJI, would have been aborted as participants and officials of NDIC were initially denied access into the court complex before law enforcement officials intervened and facilitated their entry before the seminar kicked off.

Also, over 20 policemen were this morning deployed to the Court of Appeal, Iyaganku, Ibadan, Oyo State, to safeguard the premises when judiciary workers in the state began an indefinite strike.

The armed policemen were seen within and outside the court premises. Some of them were in their vehicles.

The policemen and security officials attached to the court prevented people from gaining entrance into the court.

Efforts by our correspondent to enter the court premises met a stiff resistance from the security operatives.

“There is a strike going on, so, you cannot enter. We have been instructed not to allow anybody to enter the court, including journalists,” a securityman told our correspondent.

A senior staff of the court who volunteered to speak with P.M.NEWS outside the premises explained the circumstances surrounding the strike: “The strike is very necessary. We are suffering too much. Our salary is too poor. It is only the people at the top that are enjoying good salary but those of us at the middle and lower levels are suffering. Before, they say we cannot demonstrate because we do not have a union. Anyone that tries to resist the injustice from the government is given a query and subsequently sacked. That era is gone and gone for good. We want good pay that can sustain us and our family,” he stated.

The premises of the Federal High Court at Adeoyo was completely deserted. Our correspondent met two gsecurity guards who informed him that the workers were on strike.