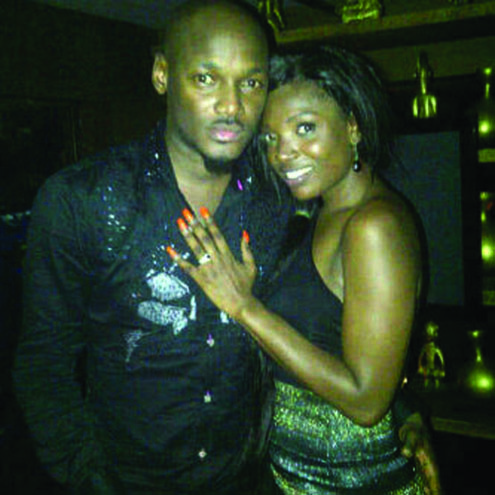 Tuface and his wife

Since the Friday 8 March announcement of outrageous wedding gifts of two brand new Toyota Prado SUVs and part sponsorship of a luxury white wedding in Dubai for music star Tuface Idibia and his wife, Annie, by Governor Godswill Akpabio of Akwa Ibom State, many have slammed the governor for his profligate spending.

Akpabio had stunned guests that thronged the Apostolic High School, Eket-Ibeno Road, Esit Urua community, Uyo venue of the traditional wedding of the celebrity couple, when he promised to bankroll an all-expense paid trip of at least 29 delegates from the state for the Idibias’ white wedding coming up on 23 March in Dubai, UAE.

The governor added that the Eket-Ibeno Road, which has remained in a bad state for a long time, is to be fully rehabilitated before the next child dedication ceremony of the couple.

But this generosity, however, riled many Nigerians who described the gesture as wasteful given that the total cost would be borne by the state whom reports claimed has 80 percent of its citizen still living in poverty and salaries to civil servants are known to be irregular despite the fat revenue allocation accruing to the state.

A tentative breakdown of the Akpabio’s largesse for the music star’s wedding extravaganza in the gulf state country shows that an Emirates Airways return ticket for Lagos-Dubai-Lagos is about $810 (about N129,600). When multiplied by at least 35 people (29 Akwa Ibom delegates, the couple and their parents, or representatives) plus the cost of other protocol arrangements, including visa application fees, the figure will be about N10 million. But if the governor prefers a chartered flight arrangement or the use of his private jet to guarantee executive comfort for the delegation, the cost will soar.

The financial burden on Akwa Ibom State’s treasury is expected to also include the cost of transportation and accommodation of the delegation. And if the cost of lodging in a five-star hotel befitting the status of a music star like 2Face is to be considered, the state is expected to fork out an average of $2,000 per room for a night (multiplied by 35 persons), this amounts to about $70,000 (about N11.2million) a day. The party might be in Dubai for at least three days, pushing the cost of hotel accommodation to $210,000 ( about N33.6 million).

To take care of other exigencies, including at least $2,000 for each delegate as estacode ($70,000) or about N11.2 million, and other bookings for the wedding proper and reception, would gulp about N10 million.

A conservative estimate show that by the time the guests return to Nigeria at the end of the wedding jamboree, close to N100 million, including the cost of the two SUVs, would have gone from the state treasury.

“This amount could have been enough to do something more useful to the society,” said Tope Fasua, an Abuja-based public affairs commentator in an interview with a Nigerian online news portal.

He said that fund could buy several volumes of books for University of Uyo that has been crying of funding challenges, as well as used to procure a lot drugs that could be dispensed to Akwa Ibom citizens free.

Rotimi Fashakin, Spokesman for the Congress for Progressive Change, CPC, said this type of anti-people expenditure is only symptomatic of a leader that emerged through the subversion of the people’s will and desire.

He noted that such reckless spending of available resources at the disposal of some Niger Delta governors has made the Petroleum Industry Bill, PIB, to suffer a long delay at the National Assembly till today.

“This type of financial recklessness by governors of oil rich states is another reason militating against the passage of the PIB. The 10 per cent being proposed for the host communities is seen as superfluous if this type of unimaginable imprudence becomes second nature for some of these governors,” Fashakin said.

He added that if it were his personal resources, Akpabio would not do what he did, but having realised that Akwa Ibom earns a lot, based on 13 percent derivation, he could afford to spend on anything that catches his fancy.

Some citizens of the state who were also incensed by the gifts to the rich music star said there are many areas of the state that need government intervention.

Samuel Ekong, a Lagos-based lawyer and indigene of the state said ironically there are some areas in Ikot Ekpene zone where Governor Akpabio comes from that still need a lot of government attention.

Obo Effanga, Governance Manager, Action Aid Nigeria, sees the governor’s action as “embarrassing, as it defeats the purpose for good governance, particularly in the allocation of resources.

“This is very embarrassing indeed…when a governor allocates public resources to individuals because of their closeness to him, how does this enhance the purpose and the interest of the ordinary citizens in the state, on whose behalf the governor claimed he was making the donation?” Effanga queried.

He noted that if the amount to be spent on the ego trip to Dubai were to be invested in the provision of books to school libraries, medical facilities in hospitals or boreholes to communities in the state, including the musician’s new wife’s village, “many citizens would derive more utilitarian value from the expenditure.”

Egondu Okorie, a supporter of the governor, via his Facebook page was, however, excited about the governor’s gesture and expressed disappointment at those he said were making “shallow minded comments”, which he noted would not happen in civilised societies.

One of the aides to Governor Akpabio, who spoke to P.M.NEWS anonymously also frowned at the reaction of the critics of the governor.

According to the governor’s aide, this act of generosity is in his gene and the criticisms will not stop him from showing his large heart at all times.

“What those Nigerians are saying now is that he should not be generous. But that is not possible as it comes natural to him,” said the aide.

In a chat with Bayo Omisore, 2Face Idibia’s publicist, he said his artiste is not bothered about the backlash trailing Governor Akpabio’s largesse.

“What do people expect 2Face to say or do? The governor was one of the dignitaries at the wedding held in his state and as a matter of courtesy, he made a promise of some gifts to the couple, that is all. We don’t really see why there should be any fuss over that,” Omisore told P.M.NEWS.

Last Friday, many Nigerian celebrities stormed Uyo for what has turned out to be the “Showbiz wedding of the year” when Tuface and his long-time love, Annie, were officially joined as man and wife.

A dinner was later held same day at Akwa Ibom government house in honour of the new couple with the creme of Nigerian society including Senator Florence Ita Giwa, Iyanya, Kate Henshaw, Ini Edo in attendance.