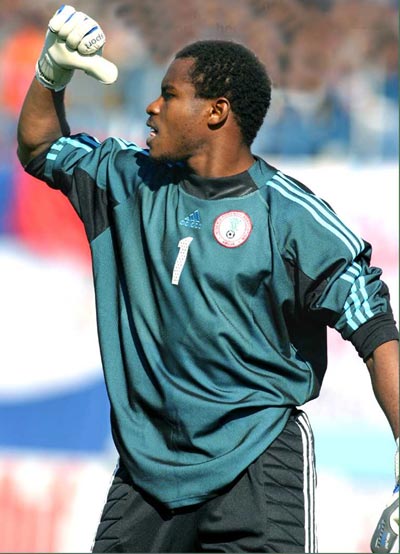 On loan at Maccabi Tel Aviv until the end of the season, Super Eagles of Nigeria’s goalkeeper, Vincent Enyeama says he would love to remain with The Yellows if the move is authorised by his parent club Lille of France.

The agreement between Maccabi Tel Aviv and the Cypriot side will run out in the next three months. Thus, the Israeli leagues are expected to make a decision soon on whether to retain Haimov or Enyeama for next season.

Sports Walla quoted Enyeama as saying: ”I like Maccabi Tel Aviv. The club gave me life after what happened last season at Lille. I don’t currently know what will happen next season because I have a contract for two more years with Lille.

”I prefer to play where they give me playing opportunities and do not care where it is. Whether it will be Lille, I’ll be there because I have a contract, if it is Maccabi Tel Aviv, I’d love to play here. ”

After Sunday’s 5-0 hammering of Beitar Jerusalem, Maccabi Tel Aviv are 10 points above their nearest challengers for the title Maccabi Haifa.

”I do not think it was one of our easiest games. Important thing is we got the points and we kept the 10-point gap at the top.

”Gap means nothing. Maccabi Haifa have had a good season. We cannot relax because we have 10 points., If we lose our position, it will only be because of ourselves,” said Enyeama.

Enyeama, who was officially chosen as the best goalkeeper at the Africa Cup of Nations in South Africa last month, has made 18 appearances in the Israeli top flight league.