I Never Wanted To Join The Police 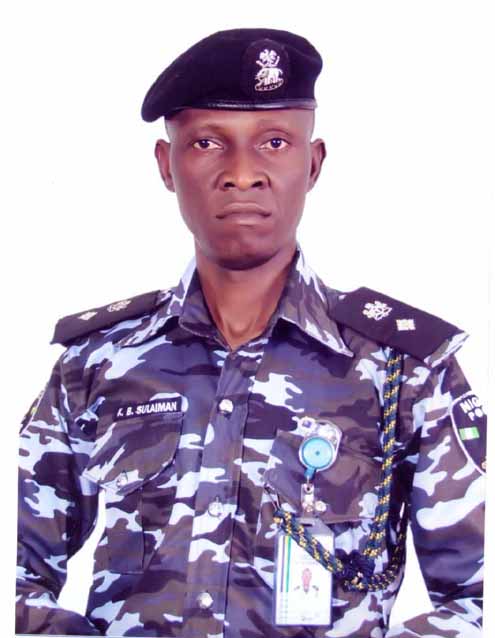 How have you been able to achieve success in such a short time as Taskforce Chairman, especially at Oshodi?

I want to give thanks to the Governor of Lagos State, Babatunde Fashola, who gave me the opportunity to serve the state and the Nigeria Police who constantly give me situation report of the area. And if one is given the opportunity to serve, one should put in his best. Since we started, based on success and encouragement from my leaders, my boss, we were able to achieve all these successes. All these praises should go to the governor who has that passion.

Over a year ago, you cleared illegal structures at the Agege Abattoir, but the people are fully back to the same place, why did you allow this?

It is unfortunate that those things are coming back. But it isn’t the fault of this office. Some departments in the state were saddled with the responsibility of maintaining the place after the cleaning up of the area. This was to ensure that people don’t build shanties on the land. If they haven’t done their own side of the job, we will go back to the drawing board by calling on the ministries to take possession of the area. If we don’t do that, the place will be completely taken over by those who want to build shanties. All those people are looking for free land to erect their structures for business activities and shelter.

During the demolition exercise, don’t you feel for those displaced?

There isn’t preferential treatment when we are on enforcement exercise. Immediately an officer become sentimental, that person will fail in his duties. When you are enforcing, one must put aside religion, tribe and other sentiments. It is about the law. Whatever the law says is final. If one is asked to apprehend an offender, he or she must forget his relationship with such person and enforce the law. If one is doing the right thing, he or she would be encouraged but if not, he will begin to panic.

How have you been able to manage such a large number of officers under your jurisdiction?

It is by His grace. It isn’t a sweet story always. We sometimes have some hiccups as well. And the reason was that people aren’t easy to manage. We have a lot of people in different departments and with their peculiar attitude. We sometimes have different issues. All we do is to adopt some features of leadership on how to manage people. How I manage the large officers attached to the taskforce determines whether I am a good leader or not.

This is a very peculiar situation. The reason is that there are many tank farms sited in that axis of the state. The tank farms are the only functioning fuel depot in the country. That was why the drivers bring their trucks into the state from the entire 36 states of the federation to lift fuel. The state government cannot stop the truck drivers from coming into the state to lift fuel. Those were the major problems facing the state government. The tank farms are located along the road. We are only trying to manage the situation so that it doesn’t turn to another ugly incident. I believe that at the higher level they are working on how to resolve the situation. The other side of Tin Can port, I mean where the containers are parked, we are working with the leadership of the park to ameliorate the issue. We are managing the situation in Apapa to ensure that we have a free lane for vehicles for easy movement, while other issues are currently handled by the committee inaugurated by the Federal and State Governments to decongest Apapa. I am sure that very soon, we will arrive at a solution. While we await this, we have constituted a monitoring team to ensure that the shanties erected under the bridge and along the drainage channels removed last year are not re-erected. At present, the place is free of illegal structures but the traffic congestion is the only issue yet unresolved.

You have shut down Ladipo Market, what are you putting in place to ensure that the market does not degenerate again?

If anyone wishes to trade in Lagos, he or she is free. But that person must be ready to abide by the laws of the state. Street trading, erection of structures on the walkways and converting the walkways into automobile workshop, are against the state’s sanitation law of 2010. Tribe or religion isn’t considered when issues concerning sanitation in Lagos are discussed. Ladipo wasn’t the first market shut this year and this wasn’t the first time the market would be shut. We promised to get it right this time. In order to get it right, a committee has been constituted. And the committee comprises representatives from the traders, stakeholders; I mean the Ohaneze, Ndigbo and the government. This committee is chaired by the Commissioner for the Environment, Mr. Tunji Bello. We have already reached a conclusion on the issue. And the conclusion was that, all the structures erected along the canal must be demolished. What is left is for the traders to remove their goods from the marked shops. If they can remove it early, the demolition will end quickly. But that doesn’t translate to the immediate re-opening of the market. After the environmental demands are met, the traders would sign an undertaking on how they will maintain the road and adhere to the sanitation laws of the state.

What is your office doing in the area of pipeline vandalisation?

I believe that the management of NNPC, who are the custodian of these pipelines, should be able to proffer solution on how to end the activities pipeline vandals in the country. Although, at the Taskforce, we have a unit that monitors pipelines in the state. We know that chasing pipeline vandals is a dangerous job but we have achieved success at the Taskforce. We have apprehended some vandals and they have been charged to court. If we were alerted of any attempt, we ensure that such action is prevented rather than go after the vandals when they have begun their activities.

What has been your major challenge during enforcement?

The major challenge during enforcement is the attitude of the citizens who have found it difficult to obey simple laws. They don’t want to adapt to change. For instance, if we clear a place today, if we fail to guard the place, those who were displaced from the area will return.

Did you ever think of joining the police force?

No! I am from a family where everyone loves business. My father is a businessman. While I was in the university, his business was always affected by the action of policemen. It is either when they are conveying their goods from Ibadan to Lagos; they will get stuck along the line. They will miss shipping and a lot of funds were lost. Sometimes, the goods will be beaten by rain. And these were goods that weren’t water friendly. One day, he called my elder brother and me and he said that one of us must join any of the forces in the country. Although, he had no particular force at heart. After that, we decided, but the final decision was reached during the General Sanni Abacha regime. While deliberating, my father and my elder brother said that I should join the police and do it for the family. My father had to beg me to go on the promise that after few days in the academy, if I find the lifestyle in the Nigerian Police Academy, Kano not conducive, he would pay for my flight back home. I resumed on 15 August, 1996. On getting there, I begun to familiarise myself with the environment and I found it difficult to come back home because I had new friends and others.

What have been your contributions so far?

I have done a lot. I cannot blow my trumpet. I have met and assisted a lot of down-trodden people, who would have been cheated by those who were richer than them. It is only when you meet those that I have helped to achieve certain things that can say better things about me.

How do you feel being promoted the Chief Superintendent of Police?

I feel great that I am progressing in my career. And I believe that is the joy of everybody, to grow in their chosen field.

Can you give us a brief background of yourself?

I started my education from the primary to tertiary institution. For my tertiary, I attended Ogun State University, now Olabisi Onabanjo University, Ago-Iwoye, where I read Biology. And for my second degree, I attended University of Ibadan, where I studied Peace and Conflict Study. It was after my first degree that I joined the Nigeria police in 1996. I graduated from the Nigerian Police Academy in 1998/1999. And the reason for this was that we spent 23 months instead of the normal 18 months. After leaving the academy, I was posted to Ondo State as an Assistant Superintendent of Police, ASP. After I left Ondo, I have been posted to several places like Kano, Niger and others. I got married in year 2000. And the marriage is blessed with kids.