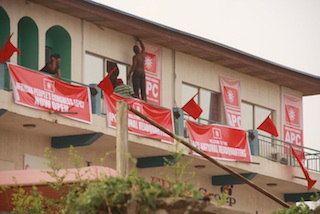 What seemed to be a carefully woven intrigue to sabotage the proposed merger of Nigerian opposition parties crystallized on Thursday as African People’s Congress unveiled its manifesto, constitution and logo to journalists in Abuja. In spite of this, Chief Tom Ikimi who is leading the merger effort of the opposition party also told journalists in Abuja that All Progressive Congress will not let go its acronym.

It believed that African People’s Congress was a contraption set up to prevent the registration of All Progressives Congress announced as the name to be adopted by the coalition of Action Congress of Nigeria, ACN, All Nigeria Peoples’ Party, Congress for Progressive Change and some sections of All Progressive Grand Alliance, APGA early this year.

However, African Peoples’ Congress will have the same acronym with the planned opposition grand coalition. And the Independent National Electoral Commission, INEC has already indicated that it will not register two parties with the same acronym.

Kayode Idowu, spokesperson for the electoral commission told journalists last weekend that INEC has already received a letter from African People’s Congress asking to be registered as a political party. Idowu had consequently advised the four opposition parties to apply to the Commission under another name, an advice which did not go down well with the partners in the political coalition.

Lai Mohammed, spokesperson for ACN dismissed the claims of INEC about the unavailability of the name in a press release yesterday as he argued that African Progressive Congress has not fulfilled conditions for setting up of political parties as stipulated in the Electoral Act.

“But as law-abiding citizens, APC leaders are following the stipulated conditions to the letter, and will not allow themselves to be stampeded into committing an illegality. Not even the PDP’s shameless act of sponsoring a phony party to instigate an acronym war and give an increasingly partisan INEC a reason not to register the APC will stampede the party’s promoters,’’ Mohammed said.

He listed the conditions for registering a political party to include submission of a written request, the proposed full name and acronym, constitution, manifesto, symbol or logo of the party together with the addresses of the national office of the party and evidence of payment of administrative costs.

It was as if the ‘spoof’ APC was listening to the ACN spokesman as it unveiled its logo, slogan, manifesto, constitution in its office located opposite the Apo legislative quarters area of Abuja on Thursday.

Members and other officials of the party were adorned in red caps and mufflers which is also the dominant colour in the logo of the party. “I believe the unveiling of the party has finally put to rest the contention over the acronym APC. We are waiting for their response within thirty days, because we have fulfilled every stipulated requirement in the Electoral Act,” Kingsley Nnadi, legal adviser to the party told journalists.

Nnadi added that the party already has offices in 26 states of the federation while disputing the claims of any link to PDP.

Indeed, in a speech he delivered at the occasion, the Acting Chairman of the party, Onyinye Michael Ikeagwuonu dismissed the coalition of ACN, CPC, ANPP and others as “an amalgam of people that must rule” while also criticizing the PDP.

But just as the press conference was going on, Chief Tom Ikimi, chairman of the Merger Committee of the opposition parties was at another venue telling journalists that All Progressives Congress will not let go of the acronym.

Ikimi accused the PDP of masterminding the formation of the African Peoples’ Congress and another party with the same acronym, All Patriotic Citizens. “They are trying to muddy the waters by establishing all forms of APCs,” Ikimi who spoke on behalf of the other parties in the merger said.

“By that public announcement, the name All Progressives Congress and the acronym, APC, became our intellectual property which we shall guard jealously,’’ he stated.

Ikimi also debunked allegations that the parties in the merger did not carry out enough investigation before choosing the name said. He added all the legal and constitutional process required to formalize the merger were being finalized.