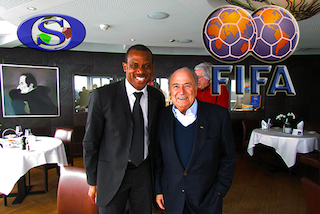 Oliseh broke the news of his appointment by the world soccer governing body on social media networking website, Twitter on Saturday .

The former Ajax Amsterdam man is however “flattered” by his appointment into the FIFA Technical Study Group.

“It is with great honour that I share with you my appointment by the world’s football governing body, FIFA as a member of its Technical Study Group amongst other functions.

“I am flattered to be a part of this football family and I believe that this is a blessed period not only for me personally but for my beloved nation, Nigeria!” Oliseh, a SuperSport Soccer Analyst further stated on his official website, www.sundayoliseh.tv.

Oliseh holds a UEFA Pro Licence in coaching and made more than 60 appearances for Nigeria between 1993 and 2002.