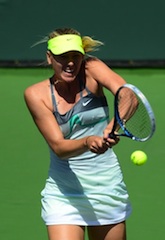 The 25-year-old Russian, already projected to supplant Australian Open champion Victoria Azarenka at No. 2 in world rankings by reaching her first final of the season, broke Wozniacki twice in each set en route to the victory in one hour and 21 minutes.

The victory in a match between former champions gave her a second title to go with the Indian Wells crown she claimed in 2006.

It was Sharapova’s first trophy since her 2012 French Open triumph gave her a career Grand Slam, and stretched her streak of years with at least one title to 11.