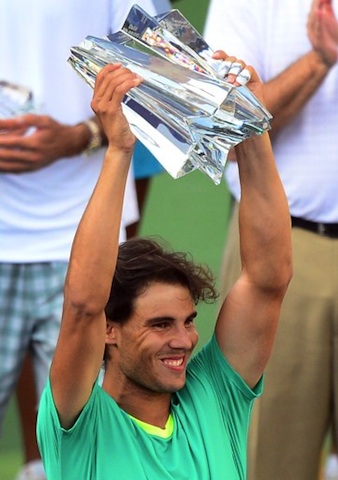 Nadal with Indian Wells trophy in 2013

The 11-time Grand Slam champion from Spain claimed his first hard court title since 2010 and a record 22nd title in an elite Masters event. He had previously shared the record of 21 with Roger Federer.

Nadal hadn’t played a hard court tournament since pulling out of the Miami Masters last March with tendinitis in his left knee — the same sort of knee trouble that would sideline him from his second-round Wimbledon exit in late June until February.

He came back last month to post a runner-up finish in Vina del Mar, followed by victories at Sao Paulo and Acapulco. In all his 17-1 win-loss record is his best start to a year.

But none of those modest clay court tournaments posed the challenge he faced at Indian Wells, where the field featured 49 of the top 50 players in the world.

Seeded fifth, his route to the final included a quarter-final clash with defending champion Roger Federer and a semi-final win over world No. 6 Tomas Berdych.

In the final, Nadal halted the giant-killing run of seventh-ranked Argentinian del Potro, the 2009 US Open champion who defeated world No. 1 Novak Djokovic and world No. 3 Andy Murray en route to the final.

“It is very emotional,” Nadal said. “A lot of things happened the last seven months, to be back here and to have this trophy with me is amazing, no?

“Beating three top-10, three very important players, and winning a title like this is just something unbelievable for me.”

Nadal was quick out of the blocks, breaking del Potro in the second game of the match en route to a 3-0 lead.

But del Potro won eight of the next nine games to claim the first set and take a 2-0 lead in the second.

The Spaniard was clearly struggling against the hard-hitting del Potro, his trademark forehand failing him on numerous occasions as he failed to convert break chances in the fourth game and a game point in the fifth.

“I was in tough situation,” Nadal said. “After starting the match 3-0, playing fantastic in my opinion, I had a big chance for 4-0, and then I had a good chance for 4-1.

“I lost all of these opportunities, I lost a little bit my calm.”

Nadal looked re-energized as he broke del Potro to level the second set at 3-3, and he unleashed a series of forehand winners to break del Potro again to go 5-3 up.

Gaining the break back in the sixth game was key, he said, because it let him relax and reformulate his strategy.

He served out the second set with a love game capped by an ace, walking back to his chair with a business-like air.

Del Potro, perhaps tired from his lengthy duels with Djokovic and Murray, couldn’t match Nadal’s physicality in the third set.

While those three-setters in the desert heat were draining, del Potro wasn’t leaning on that as an excuse.

“The finals are finals,” he said. “They are special, and you get the energy from everywhere to play the finals. Rafa played yesterday also. Just he played better in the end, and he deserved to win.”

Nadal broke for a 2-1 lead in the third set and didn’t face a breakpoint himself in the set.

“He played unbelievable for like an hour there,” del Potro said. “The last hour of the match he didn’t make errors. He played so solid and put me so far to the baseline and made winners from there.”

Del Potro summoned enough energy to save three match points on his own serve in the ninth game, forcing Nadal to serve it out.

When del Potro’s forehand swung wide on the fourth match point, Nadal slid to his back, then rose to his knees and lifted his arms in triumph.