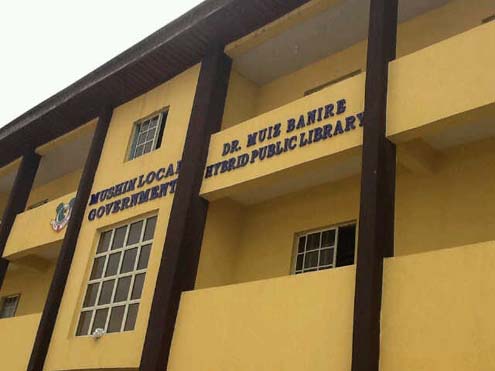 Some of the journalists who joined the Lagos State House of Assembly Committee on Local Government Administration and Chieftaincy Affairs on the committee’s recently concluded oversight function will continue to bespeak, at least for a very long time within the year, the physical result of the visionary leadership of the chairman of the Ijede Local Council Development Area (LCDA).

Ijede is the poorest LCDA in Lagos and by extension, Nigeria, as disclosed by the council chairman and confirmed by the committee.

In March 2012 when the committee first visited the council, its secretariat, a small building containing some dingy rooms, was what the chairman, the staff and other political officers lumped themselves into daily while carrying out their required jobs. As if waiting for the committee to arrive before betraying his emotion then, Hassan Adefarasin, the council chairman lamented the situation he met on ground.

The former lawmaker-turned-council chairman explained that apart from the council’s share of the allocation that gets to it from what accrues to the Ikorodu Local Government Area under which it was carved out alongside four other LCDAs, the council got nothing in internally generated revenue as it is located in an area that is considered communal in nature where most residents were engaged in subsistence farming.

After his complaint and appeal to the government to assist with special funds for the development of the area, the committee members held a closed-door meeting with him where it was learnt that they came up with ideas and advice on the best ways he could impact positively on Ijede and its environs during his tenure.

He listened. And the advice of the lawmakers paid off for him, just like it did for some of his other colleagues.

On a second visit by the committee to the Ijede council  a few weeks ago as part of its oversight function, the council chairman who received the committee in the new secretariat complex was grinning excitedly all through the visit.

Less than a year after the initial visit, Adefarasin had completed a massive one-storey building to be used as offices for staff and political office holders working in the council. He had also constructed a giant legislative chamber with an office for each of the councillors.

He also took the team from the Assembly to a newly constructed market made up of open shops and a primary healthcare centre which he said was built and equipped by Senator Olorunimbe Mamora in support of the council.

Adefarasin openly praised the lawmakers for their encouragement and ideas which he said had given his administration a plus.

Just like Ijede, some other councils had projects to show to the committee. In Mushin, the council chairman, Adepitan Babatunde, led the members to a newly constructed e-library which he said some private institutions had concluded plans to equip for the residents of the area. He said this was aimed at further reducing the crime rate in the area. He said the council held regular security meetings with law enforcement agents to sort out ways of curbing crime, adding that he constructed 32 roads in his first term as chairman and that he was using this current term to rehabilitate roads.

However, a major challenge bedevilling the council is the lack of enough offices for staff which the chairman said he was looking into.

The Yaba LCDA chairman, Jide Jimoh and the Mainland council chairman, Adekanye Oladele, were specially commended for transforming their councils. For Jimoh, the committee praised him for giving a face-lift to the council chamber calling it the best council chamber in the state while Oladele received commendation for erecting a giant edifice as the council secretariat. The committee members said the transformation was a huge deviation from what they used to know of the council.

At the Agege Local Government Area, the council chairman, Jubreel AbdulKareem, listed 38 projects his administration had embarked upon within the year. The projects inspected by the committee included the construction of Abeokuta street as well as some drainages.

At the Orile-Agege LCDA, its chairman, Taofeek Adaranijo, said his administration had 25 projects to its credit in 2012. Among these projects are roads and drainage channels. However, there were issues within the council which the committee resolved during a meeting.

In Kosofe local council, the lawmakers commended the chairman, Babatunde Sofola, for his efforts at beautifying the environment and for giving the council a face-lift. They also confirmed the cordial relationship that exists between the political office holders in the council and the staff saying this was because of chairman took issues of welfare seriously. They however urged him not to relent.

Among other council chairmen commended by the committee was Ibrahim Sanusi of Ojo LGA who the lawmakers said had transformed the council secretariat considering the dilapidated structures they met when they first visited seven months ago.

As against its last visit early 2012, when the committee visited the council again recently, the members were surprised at the new face of the council secretariat. A gigantic building housing other staff and detached from the chairman’s office had been erected and tastefully furnished. The council chamber likened to a viewing centre then, had become an envy of the lawmakers.

Representatives of the Alaba International Market also confirmed that the chairman had touched almost all the communities in the area especially with the rural electrification project, construction of police divisions and a bridge.

The council chairman also said his administration had renovated three schools in the area and constructed drainages to complement the efforts of the state government. He said the council had completed a vocational centre that would begin operation very soon adding that he made the effort to have something to show. “I fear the state House of Assembly and must be ready to show the members something when they come,” he said.

At the Ejigbo LCDA, the council chairman, Kehinde Bamigbetan, told the committee that his administration made it compulsory for all the councillors to have constituency offices so that the council would be alert to the needs of the residents. He said the council also provide free health services and drugs for the residents, adding that its jetty was almost completed to boost water transportation in the state.

The lawmakers also commended Ayodele Adewale of Amuwo-Odofin for constructing a massive legislative chamber which he said would be the best among the councils when completed. They commended the Oto-Awori council chairman, Bolaji Kayode Robert, for constructing a storey building health centre, one of the many which he promised to complete within the tenure.

Other council chairmen commended included Akeem Sulaimon of Bariga LCDA, who constructed some roads within the Bariga area and the chairman of Iru/Victoria Island LCDA, Abayomi Daramola, who has almost completed a six-storey secretariat complex for the council.

The new complex, according to him, would also create opportunities for the council to generate revenue since it has halls that could be rented for events by residents of the state.

For the councils which had issues to resolve concerning the running of their affairs, their management staff were invited to the House while others were given ultimatum to put their councils in order.

Sulaimon, who is the chairman of Conference 57 in the state, said the visit had shown that the state House of Assembly is no longer taking it easy with the council chairmen. “If this was how the oversight function was done in the past, I am sure we would have gone far,” he told journalists who accompanied the committee, adding that the first visit of the committee early in 2012 paved the way for the progress recorded by many of his colleagues.

“This visit has yielded enough to earn the committee a pass mark. Most of the council chairmen that earned the bashing of the committee in the last visit have now come out finer than they were,” he added.

He promised that areas where the committee found some faults among the councils would be resolved by the chairmen adding that the competition would continue.

Chairman of the committee, Moshood Oshun, had always maintained that the House would ensure that the council chairmen got closer to the people of the state. He also vowed that his committee would work in such a way that just as the governor of the state, Mr. Babatunde Fashola, is doing his best, the council chairmen would become successful, accountable to the people and finally boost the fortunes of the Action Congress of Nigeria (ACN), the ruling party in the state.

In one of such occasions, Oshun told journalists covering the House that, “the party remains supreme and we must carry out our tasks in accordance with the dictates of our party.

“No single individual, as far as the party is concerned, can bring to ridicule all that those who fought for the party’s stronghold and goodwill, have maintained. Asiwaju (Bola Tinubu) remains the eye and body of our party and his constant warning is for us all not to bring the party to disrepute through how we work and behave.

“So I can assure you that this set of council chairmen would do nothing but work, work and work.”