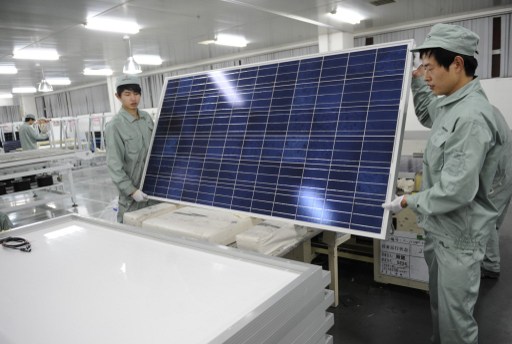 SHANGHAI (AFP) – China’s Suntech has made a painful journey from being the world’s largest solar panel producer to flirting with bankruptcy in just a year, highlighting the woes of the industry it shaped.

Oversupply as Chinese producers flooded the market and trade disputes over alleged Chinese dumping caused a sudden and spectacular reversal of fortunes for Suntech, which has defaulted on repayments for a $541 million bond issue.

The board ousted the company’s renowned founder just days ago after 12 years in which he led it from nothing to world market domination and now to the edge of ruin, leaving it scrambling to secure new funding and hold creditors at bay.

The global solar industry has been burned by the economic slowdown in Europe and the United States, together with weak prices blamed on Chinese companies which sought to build market share by under-cutting competitors.

The European Union and United States last year targeted Suntech and other Chinese solar panel and cell makers, accusing them of selling their products at below cost and receiving “unfair” government subsidies.

Suntech, a private company, denied the allegations but made no secret of its aim to keep prices at rock bottom, which it said made solar energy available to more people.

“What (Suntech) has done is increase supply to the market so much, that they really almost can’t sell anything at a profit now,” said Ben Cavender, associate principal of China Market Research Group (CMR) in Shanghai.

“It is going to be difficult for them going forward,” Cavender added. “You might end up seeing a very different company down the road.”

Suntech said earlier this month it would shut a manufacturing plant in the United States in a bid to “rationalise” production capacity.

China’s National Business Daily on Tuesday quoted an official in the eastern city of Wuxi, where the firm is headquartered and employs 14,000 people, as saying it would undergo restructuring under bankruptcy proceedings.

Analysts said Suntech faced a problem common to Chinese private firms, growing rapidly in the country’s economic boom but becoming unwieldy and unmanageable as it turned into a vast corporation.