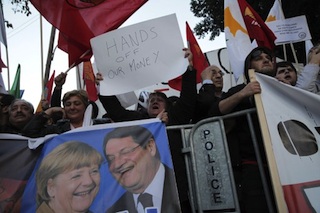 Protests in Cyprus over bailout tax

LIMASSOL, Cyprus(AFP) – Angry Russian residents of Cyprus are talking of giving up on the Mediterranean island over a eurozone bailout deal which they say unfairly targets their money.

“We are asking ourselves if we should stay here,” says Anastasia, a young Russian who grew up in the southern coastal city of Limassol, nicknamed “Limassolgrad” for the tens of thousands of Russians who live there.

“We trusted this country and its banks, then all of a sudden they take our money,” she says.

The Cypriot parliament voted on Tuesday to reject a debt bailout deal which included an unprecedented one-time levy on bank savings of up to 9.9 percent, to raise 5.8 billion euros ($7.47 billion) in return for a 10 billion euro rescue package.

Figures vary but the Moody’s rating firm estimates that Russian companies and banks keep up to $31 billion on the Mediterranean island, which accounts for between a third and half of all Cypriot deposits.

“Cyprus was a paradise until it joined the eurozone,” said Yana, who works for a real estate agent on the Limassol seafront.

“But in recent months the Cypriots have started to point fingers at us. We feel more and more like foreigners here,” she says.

“Some think they are in this situation because of the Russian money, and others are jealous.”

Yana’s colleague and fellow Russian, Tatiana, said that as soon as the banks reopen “the Russians are going to transfer their money”.

“We’re not going to give the island a second chance.”

As a condition for the desperately-needed Cyprus bailout, fellow eurozone countries and international creditors on Saturday agreed a levy on all deposits in the island’s banks.

Of the estimated 5.8 billion euros which the measures would yield, nearly two or three billion would have come from Russians living on the island, analysts said.

After parliament rejected it, the government was expected to try to renegotiate the terms of the deal with the EU and IMF, although with no clear options on how to make up the 5.8 billion euro shortfall.

In Limassol, a city of four-star hotels, luxury cars, fur retailers and trendy restaurants, the Russian community has its own radio station, newspapers and schools.

“All the Russians are hanging on a conclusion to this crisis. We give them information hour by hour, trying not to make them afraid. Aside from that, we prefer to keep quiet,” says Ilias Antoniades, a Cypriot who manages the Russian Wave radio station.

German Finance Minister Wolfgang Schaeuble, who regretted the Cyprus parliament vote, on Tuesday said that “whoever (invested) his money in countries where they (paid) lower taxes” ought to assume responsibility, a message to the Russian fortunes in Cyprus.

Several analysts said the levy meant to ensure that Brussels did not spend billions propping up possibly ill-gotten gains of Russia’s super-rich that may be kept in Cypriot accounts.

“People put clean money in the banks. The mafia put theirs in safe boxes but they aren’t touched. It’s the more honest ones who are punished,” said an angry Larissa, who owns Rus Market minimart.

“Me, I pay my taxes, I do my accounts. I don’t have any dirty money,” the Russian woman in her 40s said.

“All my customers are telling me that Cyprus, for them, is finished.”

One Limassol banker estimated that 30 percent of foreign clients are going to leave.

“Some want to keep their head offices here but they will send part of their funds elsewhere, to dilute the risk,” said the banker who declined to be named.

“I don’t know if all the Russian money here is clean. But it’s no better in Germany or in England. Over there the oligarchs buy football clubs,” he said.

A fur merchant simply fumed: “It’s the end of my business.”