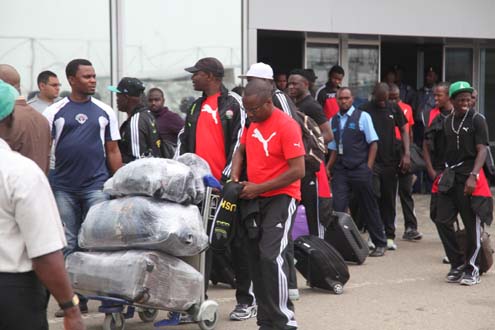 Players and officials of the Harambee Stars of Kenya landed in Lagos Wednesday morning at 11:10hrs (13:10hrs EAT) ahead of the 2014 World Cup qualifying match against Nigeria’s Super Eagles in Calabar, Cross River State.

The Kenyan team, who flew in through a Kenya Airline flight, touched down at the Murtala Mohammed International Airport, Ikeja, Lagos with high expectations of creating an upset in the match against the African champions on Saturday at the UJ Esuene Stadium.

One of the star players of the team, Victor Wayama, who plies his trade for Scottish Premier League side, Celtic, told P.M.NEWS Sports at the airport that he hopes his team can get a good result in the qualifier.

“We have to be positive going into the match and I hope we can get a good result on Saturday. I’m happy that we are meeting a good team and our team are not bad too. What I know is that there are no minnows in African football again, so we are here to play our game,” said Wayama, the first ever Kenyan player to score in the UEFA Champions League when he scored the first goal in Celtic’s historic 2–1 win over Barcelona on 7 November, 2012.

Speaking through an interpreter, Andel Amroutche, who was recently appointed the Coach of Kenya said that he and his team are glad to be in Nigeria for the match. He said that the Harambee Stars are ready to confront the Eagles on Saturday.

Meanwhile, the Kenyan team could not travel to Calabar due non availability of flight after arriving Lagos today.

P.M.NEWS Sports gathered that the team would spend the night in Lagos at Silver Grand Hotel.

They are to connect a flight to Calabar tomorrow.