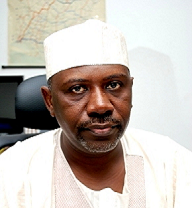 President Goodluck Jonathan has appointed Alhaji Bukar Goni Aji, OON as the new Head of the Civil Service of the Federation.

Goji succeeds Alhaji Isa Bello Sali who retires on 23 March, less than two years after he was appointed.

Alhaji Goni, was until his new appointment, the Permanent Secretary, Common Services Office, Office of the Head of the Civil Service of the Federation. He hails from Yobe State and was born on January 13, 1959.

He attended Government College, Maiduguri, Borno College of Basic Studies, Maiduguri and graduated from the University of Maiduguri in 1984.