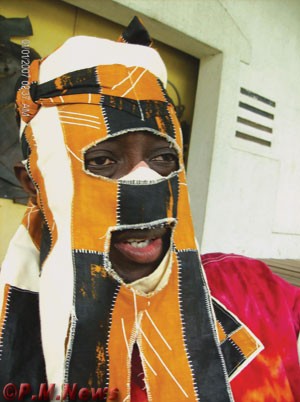 Though no official statement  from Globacom on its deal with the Afro-Highlife musician, sources within the telecoms giant’s corporate headquarters said Lagbaja has signed a mouthwatering deal in scores of millions of naira bracket.

The masked musician performed his first major task as Glo ambassador on Wednesday 20 March during the unveiling of the network’s new strap line tagged “Unlimited”. This was followed same day with the release of a Glo theme song, “Unlimited” in a rare collaboration between Lagbaja with pop stars and fellow Glo ambassadors, P-Square.

The new song, an upbeat mixed-genre, was released as part of the grand preparation for the 10th anniversary of Globacom on 29 August.

Mohamed Jameel, Globacom’s Group Chief Operating Officer, said the new pay-off line marks a natural progression in the growth of the Glo brand identity and represents the unparralleled commitment of the company to its subscribers.

“With the new strap line “Unlimited”, there is indeed no limit to what our stakeholders can achieve if they believe in themselves,” Jameel said.

And the lyrics of the new song from P-Square and Lagbaja reflect the message of Globacom’s new campaign.

As part of its strong push in Nigeria, Globacom is wise to always align with popular names in music and movie industry. It has already works with a number of such entities across board through special partnerships, sponsorships, and ambassadorships, and these have brought a lot of attention to the brand.

P.M.NEWS learnt Lagbaja will soon be officially unveiled as ambassador. He will not only have his face splashed on many Glo billboards across the country, but involved in many shows and marketing campaigns geared towards the celebration of the telecomunication company’s anniversary.