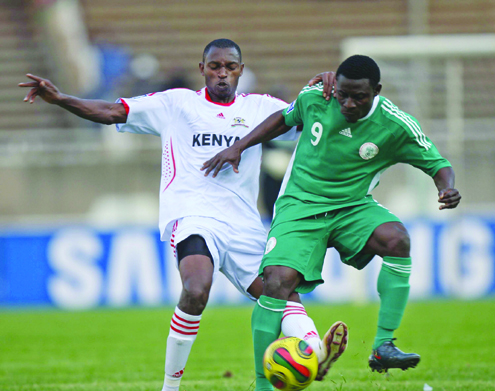 Media Officer of Nigeria’s Super Eagles,  Ben Alaiya, has said  that the team have been given an order to go for early goals when they meet the Harambee Stars of Kenya in a 2014 World Cup qualifier at the UJ Esuene Stadium, Calabar, Cross River tomorrow.

Alaiya said the plan of Coach Stephen Keshi is to use the early goals to unsettle the East African team who have been boasting of their readiness to upset the African champions in the crucial tie.

The veteran sports journalist hinted that the technical crew of the Eagles is targeting early goals in order to rattle their opponents because failure to score them early may give Kenya the confidence that may hamper Eagles’ chances in the match.

Giving insight into the likely line up of the Eagles in tomorrow’s match,  Alaiya disclosed that he expects returnee Obafemi Martins who play Major League Soccer, MLS’s Seattle Sounders and Dynamo Kiev of Ukraine striker, Brown Ideye to lead the team’s onslaught against Kenya.

According to him, “from all indications I hope to see Martins and Ideye in the Eagles’ attack and you know when you have a pair like that it means the coaches want early goals in the match.”

Martins is also looking forward to optimism and high expectations.

“There is no small team anywhere in the world, but we will give our best against Kenya and hopefully we can win.”