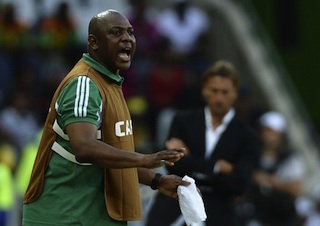 Nigeria coach Stephen Keshi takes his African champions into a 2014 World Cup qualifier against Kenya later on Saturday but he has stated he is already eyeing a semi-final spot at next year’s World Cup.

Keshi led the Super Eagles to win a third Africa Cup of Nations title last month in South Africa, and he said his team will play like champions on Saturday against the Harambee Stars on their way to making World Cup history in Brazil.

“We want to play at the Brazil 2014 World Cup, with the semi-final as our target and who says we cannot win the World Cup. But it has to start with a win against Harambee Stars on Saturday,” said a bullish Keshi.

“I want us to play as champions of Africa. Yes, we were champions at the last Nations Cup in South Africa, but that is gone and gone forever.”

Nigeria have featured at four World Cups with their best performances being at the 1994 and 1998 competitions when they reached the second round.

They are top of Group F with four points from two matches, while Namibia are second on three points. Malawi have two points and Kenya are bottom of the standings on a point.

The African champions will be missing several top stars from last month’s Nations Cup triumph including tournament top scorer Emmanuel Emenike, who is still out with a hamstring injury, and Celtic defender Efe Ambrose, who is suspended for this match.

But Keshi said he still expects a home victory against a Kenya team who have yet to beat Nigeria in 13 clashes – 11 losses and two draws – since their first meeting in 1968.