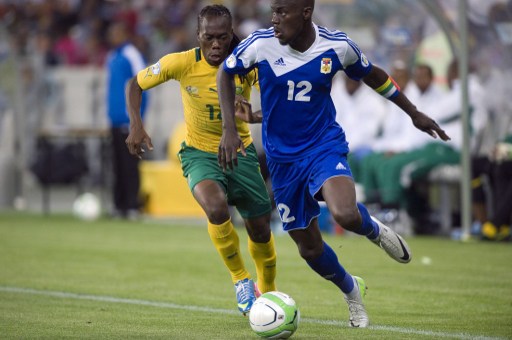 South Africa's Reneilwe Letsholonyane (L) vies for the ball with Manasse Enza-Yamissi of the Central African Republic in Capetown. AFP

Ethiopia snatched a dramatic 1-0 home victory over Botswana on Sunday to keep alive hopes of a first appearance at the World Cup in Brazil next year.

Substitute Getaneh Kebede, who replaced fellow-striker Adane Girma for the second half in Addis Ababa, snatched the lone goal two minutes from time in the high-altitude east African city.

Ethiopia returned to the top of Group A with seven points, two more than overnight leaders South Africa, who overcame Central African Republic 2-0 in Cape Town thanks to goals from Thabo Matlaba and Bernard Parker.

Thomas Ulimwengu broke the deadlock a minute after half-time and there was a brace for Mbwana Samata before Youssef El Arabi reduced arrears four minutes into stoppage time.

This humiliating loss, coupled with draws against Gambia and Ivory Coast, means Morocco are all but out of the running for Brazil, and the future of recently appointed coach Rachid Taoussi must be in doubt.

Litsebe Marabe levelled a minute from time to give minnows Lesotho a 1-1 draw with 2012 African champions Zambia in Maseru after Collins Mbesuma opened the scoring entering the closing stages.

The failure to collect maximum points was a bitter blow for Zambia, who stay top of Group D with seven points, but Ghana can close the gap to just one point if they defeat Sudan in Kumasi later on Sunday.

Mozambique and Guinea drew 0-0 in a dour Group G clash in Maputo, leaving leaders Egypt with the possibility of opening a five-point gap should they beat generally poor travellers Zimbabwe in Alexandria on Tuesday.

Mali, third behind Nigeria and Burkina Faso at the recent Cup of Nations in South Africa, fought back to overcome Rwanda 2-1 in Kigali and rise two places to the Group H summit.

Meddy Kagere scored after 37 minutes to raise hopes of a first qualifying win for the Rwandan Wasps after a heavy away loss to Algeria and a last-gasp home draw with Benin.

But Mali scored twice within six minutes early in the second half through Mahamadou Samassa and Abdou Traore to take a two-point lead over Benin with twice World Cup qualifiers Algeria a point further back.