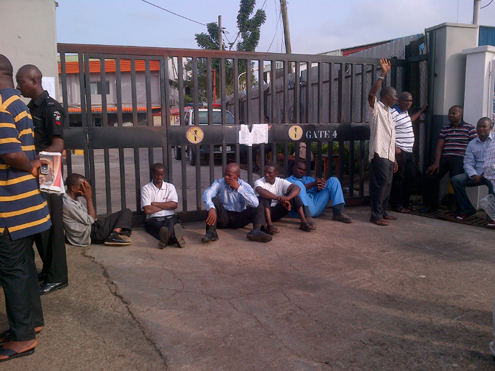 The Trade Union Congress of Nigeria (TUC) has issued a three-day ultimatum to of Aero contractors to dialogue with its workers and resolve outstanding issues or face industrial action.

The warning is contained in a statement jointly signed by the TUC President, Mr Peter Esele, and TUC General Secretary, Mr Musa Lawal, on Friday in Lagos.

The statement said that Aero should ensure that contentious issues with the workers were settled with the unions within three days to avoid strike.

“Be it known to the Aero Contractor management that should it fail or neglect to meet all the demands within three days from today, the Congress shall promptly employ all lawful means and strategies including strike action to enforce compliance,’’ it said.

The TUC demanded that the arbitrary employment and promotion of new staff over and above older and more deserving and competent staff should be reversed.

The statement condemned the company’s discriminatory reduction of salaries and allowances of workers who opposed anti-labour postures.

It also condemned the instigation and use of the police to harass and the unlawful arrests and detention of members of staff on false charges.

It stressed the need for fair and transparent disciplinary procedure.

The statement condemned the dismissal of about 642 staff without conforming to the rule of disengagement.

It advised the management to ensure that it paid the appropriate gratuities to any staff it wishes to disengage.

The statement urged the management to ensure the immediate and unconditional release of all staff detained by the police and return of their seized property.

Aero Contractors resumed flights on Friday, fifteen days after a labour crisis paralysed its activity nationwide, and a day after an agreement between striking workers and management was brokered by the Nigerian Senate.

Aero workers had been on strike since 13 March over poor conditions of service and a plan by their management to outsource jobs. The airline’s planes remained grounded while the crisis lasted.

Workers said Aero operated only three flights on Friday and the Managing Director of the troubled airline, Obaro Ibru, celebrated the resumption on his Facebook page with ten words: ‘First flight of the new Aero, what a good Friday.”

The first three flights, workers said, were Uyo, Abuja and Port Harcourt bound. More flights are expected on Saturday and full scale operation would only resume on Tuesday.

Aero management agreed on Thursday to conduct an appraisal in three weeks and lay off staff who do not meet their requirements after paying their severance entitlements.

Although Aero is back in the skies, its problems seem far from over.

Aero is indebted in billions of naira and the Assets Management Corporation of Nigeria, AMCON, now owns 60 percent of the company while the Ibrus own only 40 percent.

.with additional reports by Simon Ateba