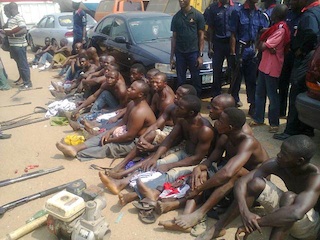 Five petrol thieves, who siphon fuel from the pipelines of the Nigerian National Petroleum Corporation, have been arrested in Lagos.

They were arrested by the operatives of Nigeria’s Inspector-General of Police’s Special Task Force on Anti-Pipeline Vandalism Unit. Mr Friday Ibadin, Assistant Commissioner of Police in charge of the Task Force, said in Lagos today that the suspects were arrested on Sunday at 7th Avenue, FESTAC Town Lagos, with 270 bags containing 120 liters of petrol each.

“We got an intelligence report at about 12.30 am, that vandals were at Ijedodo, Ijegun in Iba Local Government Council Development area of Lagos, and were sailing across the river along FESTAC with petroleum products stolen from NNPC pipeline in Oke Agemo, Ijedodo.

“A police team led by Sector Commander of the task force, Lagos, Mr Onaghise Osayande, cordoned off the area. They suspects were arrested and several bags of stolen PMS were recovered.

“I wish to use this medium to beg Nigerians to stay away from all NNPC pipeline as police is determined to reduce to its barest minimum the rate of pipeline vandalism,’’ he stated.

The ACP said the leader of the gang, a 52 years old, who claimed to be a palm wine tapper, said he has been in the business in the last two years.

“I am also a sand dredger and sometime last year I met a man popularly known as Ebi at Ikorodu. He asked me to join him in vandalism that there is a lot of money to be made from the business. I joined him and my duty is to arrange for boys that would assist me carry the product out of the creeks. As soon as we have been able to dredge the hole, I will attach the hose to the valve and connect with to the bags. Each bag contains about 125 liters of either petrol or diesel.

The bags would be tied to the others and dragged with the canoe.

The suspect claimed that there were always buyers waiting at Apapa to collect the product at N6,000 per sack of 125 liters.

.With reports by NAN