Chief Tony Anenih, Chairman Board of Trustees of Nigeria’s ruling Peoples Democratic Party has declared that the insecurity in the country requires brainstorming and that was one of the issues he came to Abeokuta, capital of Ogun state to discuss with former Nigerian leader, Chief Olusegun Obasanjo.

Anenih who was at the hilltop residence of the former President with some of the Board members maintained that Obasanjo remains the leader of the party. He said BOT members also came to consult him on the internal crisis rocking the party as the party gets ready for the the 2015 general election. 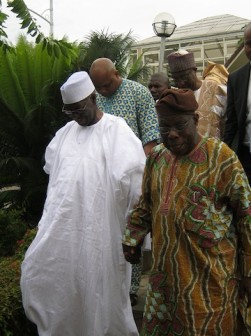 OBJ and Tony Anenih at the Hilltop residence of Obasanjo

Ogun state is among the states with divisions among members and the complexion of local politicians who attended the meeting today must have indicated to Chief Tony Anenih that he has a lot of work to do to reconcile the various factions under the party’s umbrella.

But Anenih was not bothered by this schism when he spoke to journalists.

According to him:” I am here to see my leader, I am here to pay my respect and indeed I am here with my colleagues, some members of the Board of Trustees of our party to discuss some issues that affect the corporate existence of this country. Some issues about the insecurity of the country and some issues about the party itself. When I say party, I mean, the biggest party in Africa, PDP. Those are the reasons we are here, my colleagues are all here, we are about eight of us”.

Among those that accompanied Anenih to the meeting with the former president were the Secretary of the Board, Senator Walid Jubril, Governors of Jigawa and Katsina States, Alhaji Sule Lamido and Ibrahim Shema, former governors of Nasarrawa, Alhaji Adamu Abdullahi, Senator Ahmed Makarfi and Mrs Aduke Maina, a member of the Board from Lagos State.

On what was the outcome of the meeting which was held under closed door and lasted for about four hours, the BoT Chairman jokingly said, “As you see, we are all smiling, don’t you see me smiling? And my leader too is smiling. So we are quite happy about the outcome. For now, it is not for public consumption”.

Anenih simply declared that the meeting was successful and all issues that affect the party not only in Ogun State but nationwide were discussed.

The PDP leaders after the meeting with Obasanjo

When asked to react to reports that the PDP was dead in Nigeria’s South West, Anenih said, “Let me tell you, almost all of us here are members of PDP in Ogun, some of you here, so you cannot say that PDP is dead in Ogun State. Leader of PDP is here, former President, Chief Olusegun Obasanjo, is that okay?”, he asked rhetorically.

Chief Anenih said the party would strategize to bounce back, adding that all hands are on deck to reclaim their lost
mandate, especially in the southwest states.

Expectations that the BOT members will have a stop over at the party secretariat where some party members were waiting to welcome them after the meeting at Baba’s residence were dashed as the BOT members zoomed off after exchanging pleasantries with their guest, who had accompanied them to the NNPC filling station before he retired home.