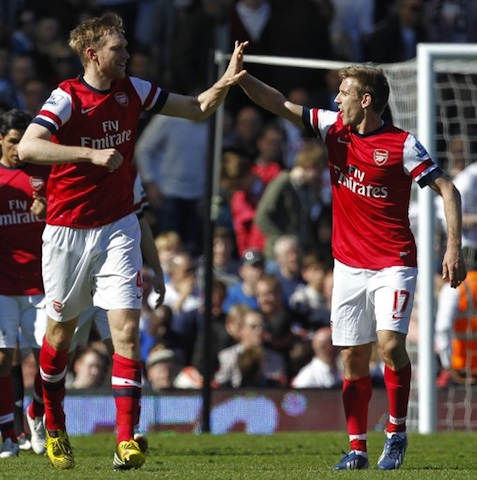 A determined Arsenal returned to third place in the Premier League table with a 1-0 win at 10-man Fulham on Saturday, while Reading and Queens Park Rangers slipped ever closer to relegation.

Arsenal, who started with England midfielder Jack Wilshere on the bench, were given a huge advantage in the 12th minute at Craven Cottage when Steve Sidwell was shown a straight red card for catching Mikel Arteta on the ankle with his studs.

Sidwell had only just returned from a three-match ban following a red card at home to QPR and Arsenal quickly asserted their advantage, with Olivier Giroud grazing the post in the 35th minute.

The breakthrough arrived from an unfamiliar source two minutes before half-time.

Theo Walcott’s free-kick was headed across goal by Laurent Koscielny and the Frenchman’s centre-back partner Per Mertesacker arrived unmarked to head the ball home from close range.

It should have been a straightforward victory, but the visitors were unable to kill the game off and then lost Giroud to a late red card after he clumsily fouled Stanislav Manolev.

Victory lifted Arsenal above Chelsea, but both the Stamford Bridge club and fifth-place Tottenham Hotspur now have two games in hand on Arsene Wenger’s side.

Chelsea will regain third place if they win at Liverpool on Sunday, while Spurs can close to within two points of their north London rivals if they overcome second-place Manchester City.

At the other end of the table, QPR and Reading appear to be living on borrowed time after both sides lost and saw three of the sides above them win.

Bottom club Reading went down 2-1 at Norwich City, to leave Nigel Adkins’ men 10 points from safety with only 12 points to play for.

Quick-fire goals from Ryan Bennett and Elliott Bennett early in the second half put Norwich in control at Carrow Road, before Garath McCleary replied with a fine individual goal for the visitors.

QPR are above Reading on goal difference alone after a 2-0 loss at home to Stoke City, who claimed a first win in eight games to ease their own relegation fears.

Peter Crouch put the visitors ahead from strike partner Cameron Jerome’s cut-back shortly before half-time, with Jon Walters adding a second from a twice-taken penalty after a foul on Crouch by Clint Hill.

The defeats for the bottom two mean that both sides could be relegated as early as Monday, but only if fourth-bottom Aston Villa win at leaders Manchester United.

Wigan Athletic spurned an opportunity to move level on points with Villa after a 2-0 defeat at West Ham United left the FA Cup finalists in the bottom three.

Matthew Jarvis broke the deadlock in the 21st minute with a left-wing cross that crept into the bottom-right corner and captain Kevin Nolan sealed victory 10 minutes from time by hooking home from an Andy Carroll flick-on to register his 100th career goal.

Paolo Di Canio enjoyed a second successive win as Sunderland manager as his new club overcame Everton 1-0 to pull six points clear of the drop zone and leave a dent in Everton’s aspirations of qualifying for European football.

Stephane Sessegnon claimed the only goal of the game on the stroke of half-time, beating Tim Howard with a low strike from 20 yards after Leighton Baines conceded possession.

Newcastle are six points clear of the bottom three, three points above Villa and behind Stoke and Sunderland on goal difference.

In the day’s other game, Swansea City and Southampton played out a goalless draw in their mid-table tussle at the Liberty Stadium.