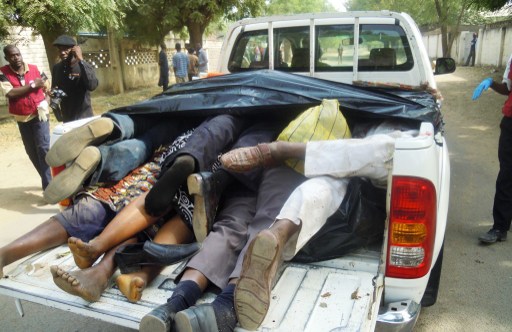 File photo: victims of Boko Haram piled up after being killed

Rescue workers on Tuesday struggled to reach a remote Nigerian town where the military was restricting access after fierce clashes that killed 187 people, as a regional governor ordered a massive relief effort following the “barbaric” violence.

The bloodshed in Baga on Lake Chad in northeast Nigeria could mark the deadliest episode in the insurgency of Boko Haram, the radical Islamist group blamed for scores of attacks since 2009.

Baga residents have accused the military of firing indiscriminately on civilians and setting fire to much of the fishing town.

In addition to the 187 people killed, 77 others were injured while more than 300 homes were destroyed, according to the Red Cross.

The military has disputed those figures, while Nigeria’s president has ordered a probe into reports of widespread civilian deaths.

“We are making efforts to get clearance from the security agents to get in and assist the victims of the violence,” he said.

Much of the town remains deserted after the fighting on Friday, which forced thousands of people to flee, said a resident who asked that his name be withheld.

“Baga is still under military siege,” he told AFP. “The town is at a standstill with little food and water, which has forced even those of us that stayed behind to start leaving.”

The governor, who toured Baga on Sunday, called for emergency funds to rebuild the destroyed homes as well as the immediate provision of food and clothes to the survivors.

UN Secretary General Ban Ki-moon said in a statement he was “shocked and saddened at the reports of high numbers of civilians killed”.

Washington also condemned the violence and the deaths of many civilians.

Nigeria’s military has been accused by leading rights groups of widespread atrocities in the campaign against Boko Haram, including killing scores of civilians.

The details of the alleged military atrocities in Baga are still emerging, but it could mark a major setback in Nigeria’s effort to end the insurgency.

Baga’s location near Chad and Niger is problematic for Nigeria’s security forces as people from all three countries move freely through porous borders, said Shehu Sani, an expert on religious violence in Nigeria.

The security forces struggle to identify the insurgent and criminal groups migrating in the region, a confusing and lawless environment that has led to the reckless targeting of innocent civilians, said Sani.

“The security agents are very much confused as to who is an insurgent and who is not,” he said.

Boko Haram has said it is fighting to create an Islamic state in Nigeria’s mainly Muslim north. The southern half of the country, Africa’s most populous and top oil producer, is mostly Christian.

The insurgency is estimated to have left 3,000 people dead, including killings by the security forces.

Before the violence in Baga, the deadliest day in the Boko Haram crisis came in January last year, when at least 185 people were killed in coordinated attacks in the city of Kano.