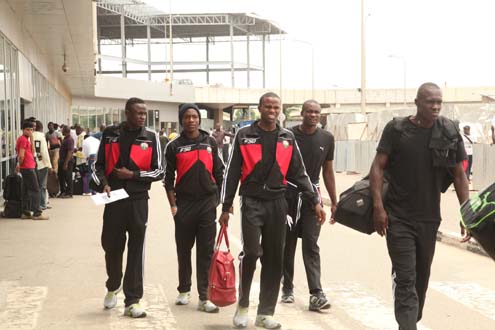 Players of Harambee Stars of Kenya at the Murtala Mohammed Airport, Ikeja

Just a month before Kenya plays Nigeria in a World Cup qualifier match in Nairobi, the country’s football governing body, FKF, has raised a red flag, saying its coffers are empty.

FKF has put the government and well wishers on notice that unless they get a $2.5 million (about N320 million) windfall, then the chances of Harambee Stars honouring their qualifiers were nil.

The Stars have their return-leg fixtures against Super Eagles, Malawi Flames and Namibia between June 5 and Sept. 6.

“The bulk of the funds will be for the purchase of air tickets for foreign-based players and accommodating the visiting team.

“The funds will also cover players’ allowances and payments to match officials,” a statement received on Wednesday by FKF Chairman, Sam Nyamweya, said.

Kenya plays Nigeria on June 5 in a World Cup qualifier and then travels to Malawi one week later for the same competition.

There is also another World Cup qualifier against Namibia in Nairobi on Sept. 6.

Should Kenya fail in its obligation to host or honour any of the away matches, then they stand to be fined and banned by World Football Governing body, FIFA.