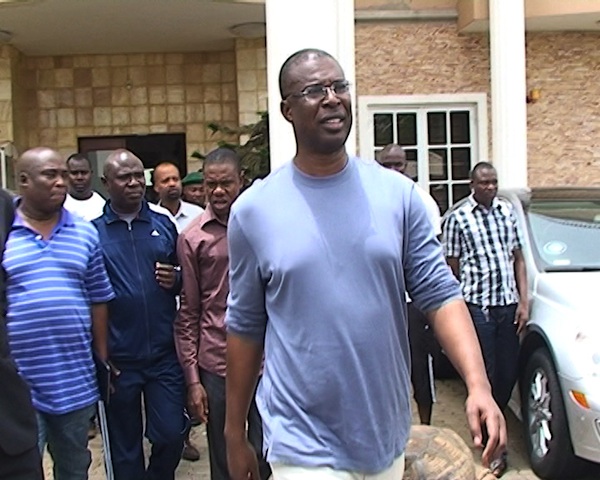 The anti graft agency said the former Governor was arrested at his No. 3, Niger Street, Maitama, Abuja home this morning after its operatives were initially told that he was not around.

EFCC said its operatives had insisted on conducting a search on the former governor’s house having obtained a warrant from the court.

“During the search, vital documents were obtained. Ironically, the ex-governor who was said to be out of town was later found hiding in a dingy corner in the upper chamber of his expansive mansion,” the Commission said in a statement its spokesperson, Wilson Uwujaren.

“He was immediately whisked away and is currently being interrogated at the Abuja headquarters of the anti- graft agency.

“He is being grilled in connection with fresh evidence linking him with a bouquet of fraudulent transactions that borders on money laundering.

“Part of the new evidence includes a number of eye-popping real estate acquisitions in Abuja.

“The arrest of the former governor is sequel to his refusal to honour invitations by the Commission. Rather than appear before the EFCC, he got his lawyers to inform the Commission that he was unable to appear because he was sick, and hospitalised in Lagos.

“The lawyer had promised to appear with his client on May 7, 2013 but failed to do so,” Uwajaren said while adding that the Commission will no longer tolerate the antics of suspects who treat its invitation with levity.

Bayelsa, in the Niger Delta, is one of Nigeria’s three major oil producing states, generating much of the two million barrels of crude the country’s produces daily.

Several other past Niger Delta governors have been caught up in massive graft cases, including James Ibori of Delta state, currently serving a 13-year sentence in a British jail for money laundering.