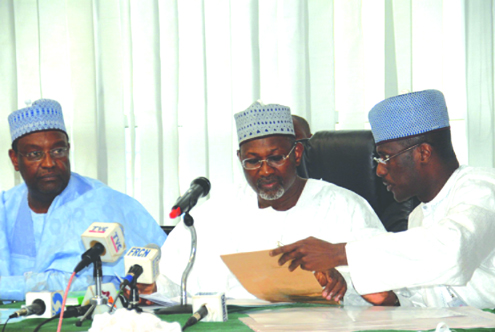 The Commission said this in a statement issued in response to a newspaper article signed by Kayode Idowu, spokesperson to Professor Attahiru Jega, the Chairman of Independent National Electoral Commission.

According to the electoral body, the actual cost of the 2011 elections, including all costs involved in the voter registration exercise, is N66.3 billion for Recurrent Expenditure and N56.6 billion for Capital Expenditure – making a total of N122.9 billion or, if you like, $800.6 million at an exchange rate of N153.5 to $1 which prevailed at the time.

INEC said the amount spent represented a savings of some N9 billion on a total of N131.4 billion that was appropriated for the purpose.

The Commission said it had previously explained the logic of the huge cost of the 2011 exercise, but while justifying the spending, Idowu said in the statement that when Professor Jega led INEC came in June 2010, it “inherited a voters’ list that no Nigerian wanted kept at whatever cost, and it also had a challenge with the legal timeline that allowed it barely six months to the 2011 General Election”.

“Faced with the national consensus against the existing register and the severe time constraint before the elections, the Commission had to adopt a methodology requiring that Direct Data Capture (DDC) machines be deployed in all the 120, 000 polling units nationwide, plus ten per cent redundancies in the event of breakdowns. That explains the 132, 000 DDC machines procured for the voter registration. There were, of course, additional cost implications with the massive workforce (i.e., 450, 000 ad hoc staff) enlisted to conduct the exercise”, said INEC.

“Let me assure you that this Commission is fiscally responsible, and it is for that reason it recently negotiated the sell-off of 78, 000 units of the laptop component of DDC machines it will not need for the CVR to some state governments”, the Commission said.

“The data of 73.5 million eligible voters gathered in the 2011 exercise is widely adjudged the most credible in this country’s history, and the Commission has ever since been cleaning up and consolidating the data to eliminate cases of duplication or multiple registration”, said INEC.

The Commission said it will only engage in Continuous Voter Registration (CVR) mandated by Section 10 of Electoral Act 2010, as Amended.

“This procedure, which is a global best practice, allows for regular update of the National Register of Voters with the data of persons who freshly turned 18 years; while the records of those who are certified as deceased get cleaned out.

Incidentally, the electoral laws of this country have always provided for the exercise, but the provision was always observed in the breach until the present Commission came on board and resolved to implement it as prescribed”, INEC said.

The Commission added that it is pursuing plans and programmes that will make the 2015 elections the best in Nigeria’s political history.
﻿