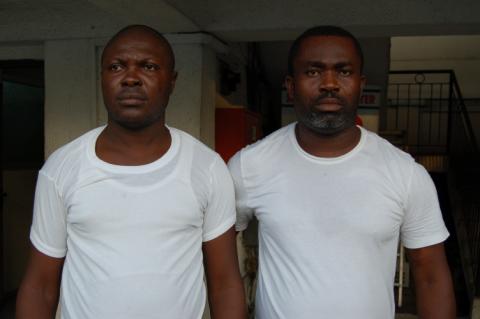 They were dragged before the court by the Economic and Financial Crimes Commission, EFCC, on charges bordering on conspiracy and illegal oil bunkering. They all pleaded not guilty to the alleged crimes.

The anti graft agency told the court that its operatives became suspicious of the activities of the suspects when one of them, Mr. Joseph Amaechi, attempted to bribe his way through a checkpoint by offering to pay N20, 000 for each of the trucks.

It claimed that further investigation revealed that the suspects are members of a syndicate that specializes in stealing of crude oil.

The EFCC further claimed that its findings indicate that the suspected crude oil thieves, led by Mr. Amaechi, operate with the backing of one Mr. Dodo Chilla Bulus, an assistant superintendent of police, who currently serves as Commander, Federal Task Force on Pipeline Vandalism, Abuja sector, and some unscrupulous members of the Nigeria National Petroleum Corporation’s maintenance team.

Shortly after they took their plea, their lawyer, Mr. Rotimi Ojo, moved an application for their bail but the Prosecutor, Mr. E.A. Ayodele, opposed the motion.

The presiding judge, Justice Elvis Chukwu, thereafter adjourned ruling on their bail application to 27th May but their trial will continue next Tuesday.

In a related development, the EFCC has also arraigned the duo of Tony Ochonogor and Efe Alex before Justice L. Akanbi of the Federal High Court, Yenagoa on separate charges bordering on illegal dealing in petroleum product and forgery.

One of the charges reads, “that you Tony Ochonogor, Efe Alex on or about the 20th day of March, 2013 at Tanua Road, Amassoma, Bayelsa State, within the jurisdiction of this Honourable Court did conspire with others now at large to commit felony to wit; dealing in petroleum product without appropriate authority and thereby committed an offence contrary to section 3(6) of the Miscellaneous Offences Act, CAP M17 of the Revised Edition (Laws of the Federation of Nigeria) 2007 and punishable under section 1(17) of the same Act”.

Another charge reads, “that you Tony Ochonogor and one Mr Tony now at large, on or about the 20th day of March, 2013, at Tanua Road, Amassoma, Bayelsa State, within the jurisdiction of this Honourable Court did forge document titled Nigerian National Petroleum Corporation Meter Ticket and Way Bill, No. A0004412, purported to be issued by Pipelines and Products Marketing Company Limited, in respect of a truck with registration number: XD459 WWR, for the purchase of 33,000 litres of petroleum product knowing same to be false and thereby committed an offence contrary to section 1(2) (C) of the Miscellaneous Offences Act CAP M17 of the Revised Edition (Laws of the Federation of Nigeria), 2007 and punishable under Section 1(17) of the same Act”.

Justice Akanbi granted the accused bail in the sum of Five Hundred Thousand Naira (N500.000.00) and one surety each.

Each surety must have a landed property within this jurisdiction and the property must be verified by the prosecutor.The case was adjourned to 14 October 2013