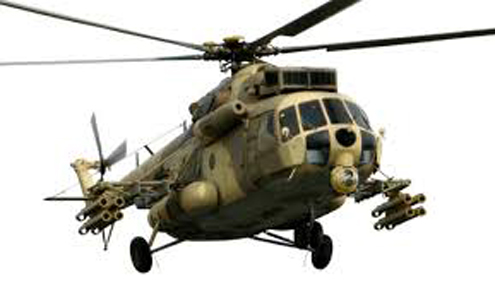 An Airforce Spider Helicopter carrying high calibre ammunition meant for an operation Thursday crashed and exploded at the Airforce base in Port Harcourt, capital of Rivers State, southsouth Nigeria. But there was no casualty.

P.M.NEWS also learnt that although fire-fighters arrived promptly at the scene of the crash, there was little that could be salvaged from the helicopter as it was burnt to ashes.

The statement signed by Group Captain Alonge said there was no casualty as all the crew members came out unhurt.

The statement also said the Chief of Air Staff, Air Marshal Alex Badeh on receipt of the report has immediately constituted a team of experts to unravel the circumstances that led to the accident and further details of the crash will be made known after investigation is concluded.

A source at the Airforce base claimed that the two Airforce pilots on board were unhurt.

However it was not also certain how much collateral damage the crash may have caused to people within the vicinity of the crash.

It was learnt that the deafening sound from the explosion caused panic within the immediate vicinity.

The Airforce officials prevented journalists from getting close to the scene of the crash. However, smoke was seen billowing from afar from the Airforce Bridge.

A Nigerian Air Force Alpha jet deployed to operations in Mali on Monday crashed in Niger Republic, resulting in the death of the two pilots, a statement by the Defence Headquarters (DHQ) said.

The jet was said to have crashed at 1.05 p.m. 60 kilometres west of Niamey, the Nigerien capital.

The fighter jet was part of Nigeria’s air fleet engaged with an African force fighting hardline Islamists in Mali.