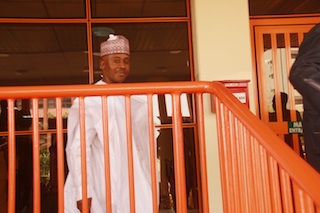 It was indeed a sad Friday for embattled former chairman of Nigeria’s House of Representative’s adhoc committee on the probe of fuel subsidy regime, Farouk Lawan and the Secretary, Mr. Emenalo Boniface, as an Abuja High Court refused their application seeking to quash the seven count charge slammed against them by the Independent Corrupt Practices and Other Related Offences Commission, ICPC, and insisted that the duo have a case to answer.

The trial judge, Justice Mudashiru Oniyangi, held that there is substantial evidence in the proof of evidence attached to the charge against them disclosing a prima facie case against them, enough to warrant them standing trial.

Farouk and Emenalo had brought an application seeking to quash their trial through their lawyer, Mr. Rickey Tarfa, a senior advocate of Nigeria, wherein they urged the court to quash the charge against them and diacharge them.

Their lawyer had predicated his argument on the grounds that the trial court lacked the jurisdiction to hear the case and contended that the condition precedent was not followed by the anti corruption agency before the charge was instituted.

He also argued that the proof of evidence did not establish a prima facie case against his clients to necessitate their being put to trial.

The court however declined to be persuaded by this line of argument while delivering its ruling on the application on Friday.

The anti corruption agency, ICPC, represented by another senior advocate of Nigeria, Chief Adegboyega Awomolo, had opposed that application which he regarded as a “strategy” by the embattled law maker and his co traveller, to waste the time of the court and delay their trial.

The trial judge resolved the three issues for determination raised in Farouk’s application in favour of the ICPC and ordered Farouk and Emenalo to face their trial.

On the issue of jurisdiction, the judge held that the court had the inherent jurisdiction to hear the suit and maintained without equivocation that section 185 of the Criminal Procedure Code which Farouk’s lawyer relied heavily on, does not require the prosecution to attach all witnesses’ statements to the proof of evidence.

The court thereafter adjourned to 19th June, 2013 for trial.

Lawan and Emenalo are standing trial for allegedly violating the provisions of the Independent Corrupt Practices and other related Offences Commission Act.

In count two, Lawan was accused of corruptly asking for $3,000,000 from Otedola with the intention of favouring the businessman in the report of the adhoc committee, an offence punishable under section 8(1) of the same Act.

In count three, Lawan was said to have corruptly agreed to accept the $3,000,000, while count four of the charge indicated that he obtained $500,000 from Otedola.

In the same vein, count five accused Emenalo of asking for$3,000,000 for himself from Otedola as a bribe, an offence punishable under section 8(1) of the ICPC 2000 Act.

The prosecution alleged in count six that Emenalo was offered bribe by Otedola but he failed to report the offer to any officer of the ICPC, an offence contrary to section 23(1) of the ICPC Act, 2000, and punishable under section 23(3) of the same 2000 ICPC Act.

In count seven, Emenalo was equally accused of receiving $120,000 from Otedola .