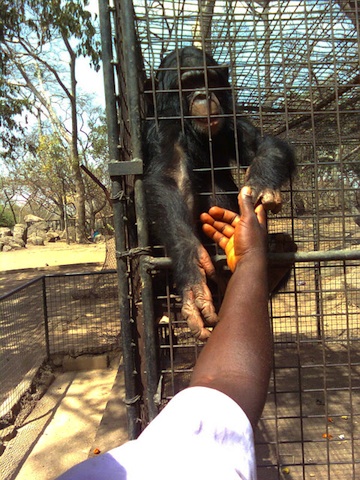 A Chimpanzee at the Jos National Zoo:, plays with its human cousin.Chimpanzees have failed to evolve into human beings

Two chimpanzees in Jos zoo, Paulina and Bobby, on Saturday celebrated their golden jubilee and 20 years of widowhood.

Their husband, Peter, died 20 years ago at the zoo.

Mr John Bernard, the Manager, Jos Zoological Garden, said the widows were born in 1963 at the zoo.

The ceremony was witnessed by many people from the zoo, the Department of Zoology, University of Jos, some NGOs, and other members of the public.

Prof. Hayword Mafyuai, the Vice-Chancellor, University of Jos, made some monetary donation for the upkeep of the apes and lauded the management of the garden for taking good care of them.

Mafyuai called on other well meaning individuals to form a club to serve as a platform for the receipt of donations for the upkeep of animals in the zoo.

He stressed the need for the zoo to partner with the university toward creating an even better environment for animals to live.

Bernard, in his remarks, recalled that Bobby and Paulina had given birth to many children, who died.

“As the duo hit 50, they need the assistance of everybody to reach the age of 60.

“We live in a society that is slowly becoming ignorant of the importance attached to the conservation of animals; this is why this celebration is very necessary so as to send out a strong statement on the need to care for, protect and promote animals,’’ Benard said.

He added: “We must also note that animals are an important aspects of our environment and we want to create the awareness that the zoological garden has always and will continue to embrace everyone who considered themselves friends of the zoo.’’

He expressed regret that many animals had been converted into bush meat, and stressed the need to manage such animals to reach their ripe ages.

He said that Bobby and Paulina were species of Chimpanzee mostly found around the Nigerian and Cameroonian border and expressed regret that the specie was gradually becoming extinct.

The Commissioner of Tourism in Plateau, Mr Joel Domtoe, commended the management of the zoo for taking good care of the animals to reach an advance age of 50.

He urged staff of the organisation to continue to take proper care of animals so that they could live much longer. (NAN)