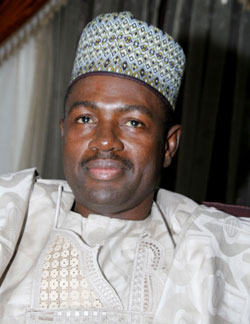 Labaran Maku, Minister of State for Information and Communications.

Nigeria’s Minister of Information, Mr Labaran Maku, has dismissed a media report associating him with the recent bloodshed in Nasarawa State, where 43 policemen were killed by a cult group, near Lafia, the capital.

In a statement signed by his Press Secretary, Mr Joseph Mutah, the minister described the media report as false, unfounded and calculated to dent his image and integrity.

“The newspaper claimed that the violence stemmed from alleged rivalry between the Minister of Information, Mr Labaran Maku, and Gov. Umaru Tanko Al-Makura over the 2015 governorship election.

“It is shocking that this story was published without recourse to the available facts about the unfortunate violence, which are in the public domain in Nasarawa State and which have also been reported widely in the media. The story is, therefore, completely false, unfounded and a calculated attempt to associate the good name of the honourable minister with the ugly violence in Nasarawa State,’’ it said.

The statement said that the reporter did not understand the facts on ground, adding that on the other hand, the story could have been deliberately planted to divert the attention of Nigerians and security agencies from the real issues.

It stressed that the minister was not in any way involved in the bloodbath in the state or elsewhere in the country, noting that Maku was renowned for his stand against violence in Nigeria.

“For the information of the members of the public, the Minister of Information has, in the last one year, waged a one-man campaign in Nasarawa State against the activities of the militia and mercenaries, who have been destroying communities, lives and property in the state,’’ it said.

It said that the people of Nasarawa State knew the facts behind this unfortunate violence and its masterminds, adding that they could, therefore, not be swayed to believe anything else.

The statement quoted Maku as “calling on all the peace-loving people of Nasarawa State, particularly the youths, to refuse to be used as agents of destruction and to rise up against the increasing wave of violence by militia, mercenaries and cultists in the state.’’

It called on security agencies to carry out a thorough investigation of the incident and bring the perpetrators of the recent carnage in Nasarawa State to justice.