No contact yet with Justice Rhodes-Vivour on kidnapped wife 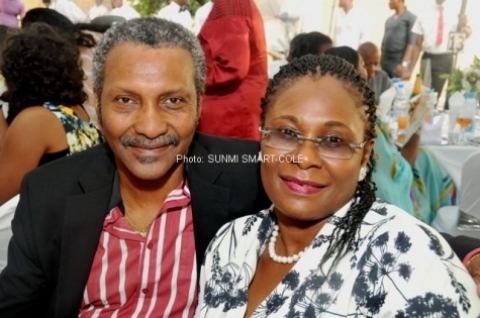 Justice Rhodes-Vivour and his kidnapped wife

The Nigerian Police in Edo State said its men have launched a manhunt for the abductors of the wife, daughter and driver of Justice Bode Rhodes-Vivour of the Supreme Court.

The police spokesman however added that the abductors were yet to contact the family of the Justice, to demand any ransom.

“Three people were seized from their car at a point on the Sagamu-Benin expressway on Friday,” a senior police officer in southern Edo State who did not want to be named confirmed, in an interview with a news agency.

“We understand the victims are the wife, daughter and driver of Justice Bode Rhodes-Vivour of the Supreme Court,” he said.

He said the kidnappers also went away with the car in which the trio were travelling to Benin for a wedding.

“We have launched a manhunt for the criminals with a view to rescuing the victims unhurt,” he said.

“We are aware their motive is to collect ransom money from the family, but they are yet to contact the family,” he added.

Lagos lawyer Festus Keyamo has appealed to the kidnappers to release the hostages.

“By the nature of their job, justices of the Supreme Court, and indeed all judges, always live a spartan life, not given to ostentation and primitive acquisition of wealth,” he said.

“Therefore, the kidnappers should know that Justice Bode Rhodes-Vivour is the wrong target of this dastardly act,” he said.

“Therefore, I passionately appeal to the kidnappers, wherever they may be… to release unharmed the wife and daughter of Justice Bode Rhodes-Vivour,” he added.

Kidnapping for ransom, which was rife in the Niger Delta before a 2009 amnesty deal for oil militants, has spread to other parts of the country in recent months with prominent Nigerians and their relations becoming targets.

In December, the mother of Finance Minister Ngozi Okonjo-Iweala, a former World Bank managing director, was kidnapped from her home in southern Delta State.

She was released a few days later allegedly after a ransom was paid.