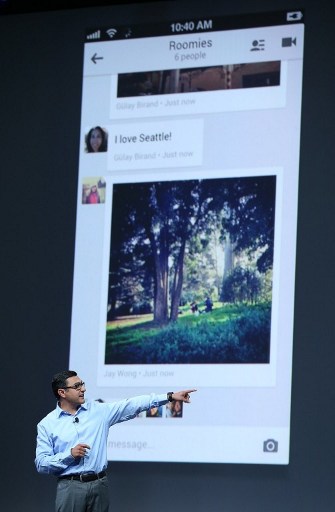 SAN FRANCISCO (AFP) – Google on Wednesday rolled out a music service for smartphones and tablets powered by its free Android software, in a challenge to streaming radio firms such as Pandora and Spotify.

The launch of Google Play All Access came at the kickoff of a packed developers conference, which features a range of improvements to the Internet giant’s products, and saw a surprise appearance by chief executive Larry Page.

“We are here because we share a deep sense of optimism about the potential for technology to improve people lives,” said Page, taking the stage to applause a day after disclosing he had been diagnosed with partially paralyzed vocal cords.

“Everything I read about Google is us versus some other company or some stupid thing,” he continued.

“I don’t find that stuff interesting. Being negative is not how we make progress; things are not sum zero.”

Page appeared calm and confident on stage and spent a half-hour fielding questions from some of the 6,000 developers registered for the annual event.

Questions ranged from privacy and self-driving cars to Google Glass Internet-linked eyewear and the need for more women developers at a gathering that skewed heavily male.

Page spoke candidly about his childhood; his belief technology companies should be allies instead of enemies and his disclosure about his medical condition on Tuesday.

“After I disclosed my voice issue and got so many great emails and such thoughtful advice, I realized that I should have talked about it sooner,” Page said.

“I wondered why people worried about keeping medial information private, and the answer is insurance,” he continued. “It makes no sense. We should change the rules around insurance so they have to insure people, that’s the whole point.”

Page capped an hours-long keynote presentation that updated ranks of software developers, along with more than a million people watching on YouTube and at viewing parties, about improvements to maps, Android, Chrome and more.

“Anything I am listening to in All Access I can easily turn into a radio station,” Yerga said while unveiling the service at the annual Google developers conference in San Francisco.

“It allows you to explore radio without rules.”

All Access launched in the United States with a monthly subscription fee of $10 and will roll out to additional countries “soon,” according to Yerga.

The California-based firm was offering discounts to those who sign up quickly for the service.

The number of Android smartphones and tablets activated more than doubled to 900 million in the past year, according to Sundar Pichai, senior vice president of Android and Chrome.

“That is an incredible achievement,” Pichai said. “We are incredibly humbled by where we have reached, but remember there are more than seven billion people on this planet so we have a long way to go.”

More than 48 billion applications have been downloaded to Android devices from the Google Play store and revenue being made by developers of those mini-programs has increased 2.5 times in the past year, according to vice president of Android product management Hugo Barra.

Google’s Android mobile operating system grabbed three out of four smartphones sold in the world in the first quarter of 2013, extending its gains over Apple and its iPhone, a survey showed Tuesday.

Gartner said more than 156 million Android smartphones were sold in the first three months of the year, or 74.4 percent of the global total. That compared with 56.9 percent in the same period a year ago.