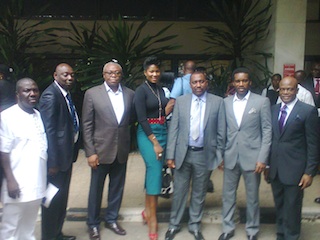 some of the celebrities at the unveiling ceremony

Punch, ThisDay and The Nation newspapers were conspicuously missing at the unveiling of media partners of the Nigerian Centenary Project which held at the Sheraton Hotel and Towers in Ikeja, Lagos today. Only five national newspapers were announced at the media partnership unveiling ceremony.
The Guardian, Vanguard, Business Day, The Sun and Nigerian Tribune were part of the 19 media partners unveiled. TheNEWS and TELL magazine were the two other print media that were unveiled.

Also present at the ceremony were Ambassador Bashir Yuguda, Minister of State for Works, Enyi Odigbo, Chairman DBB Lagos and Sam Nwaobasi, Special Assistant to the Secretary to Government of the Federation.

He added that the centenary celebration was driven by the private sector. “This is a private sector initiative. It is a laudable one for us all because we get the opportunity to truly tell the world we are good people with a rich tradition.”