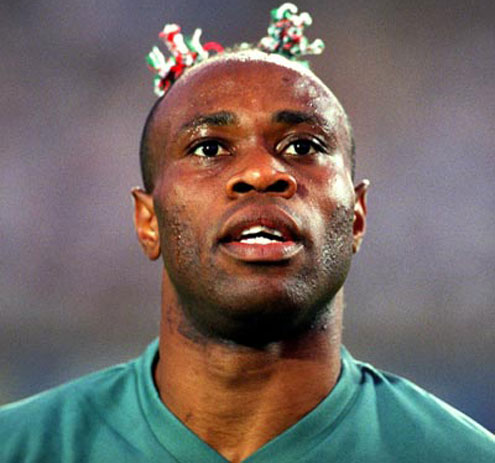 Taribo West: lied about his age

Former Inter Milan defender and ex-international, Taribo West believes that Eddy Ogenyi Onazi has a great future in the Italian Serie A.

Taribo was one of the facilitators of the deal that took Onazi to Lazio. After less than 18 months with the youth team, Onazi was promoted to the first- team squad of the Biancocelesti.

Taribo, who these days is involved in pastoral responsibilities, but with an eye for spotting young talents, has tipped the former player of My People Football Club of Ikotun, Lagos to be a big hit in the Serie A. My people FC are football team of Prophet T.B. Joshua’s Synagogue of All Nation church.

Speaking to Tuttomercatoweb.com, Taribo said: ‘’Onazi is a major player. Within two years, he will leave Lazio and make the leap. I am sure.’’

Meanwhile, Onazi is racing against the clock to get fit for Lazio’s Serie A match on Sunday against Cagliari after suffering a muscle problem in his left thigh.

In addition, the Nigeria international could miss the Italian Cup final against bitter rivals AS Roma if tests conducted on Thursday are not favourable.

He is one of the players listed by Super Eagles’ coach, Stephen Keshi to prosecute the World Cup qualifiers in June plus the FIFA Confederations Cup.