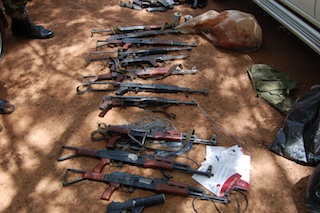 The guns seized from the attackers

Gunmen, suspected to be Boko Haram terrorists have attacked banks and police formations in Daura, the hometown of General Muhammadu Buhari, in the Northwestern state of Katsina, where there has never been any incident of terrorism since 2009, when Boko Haram began its military campaign.

Abbah said from reports made available to him, the terror-gang came in large numbers chanting “Allahu Akbar”.(Allah is the Greatest).

The army boss who told journalists that intelligence reports at his disposal indicated that terrorists who are being dislodged in the troubled North-East states are shifting their base to the northwest, called for unflinching support from members of the public in terms of giving useful information to security agencies.

Earlier reports on the Daura attack claimed that six police men and two civilians were killed, but the Katsina state Commissioner of Police, Abdullahi Magaji was silent on the number of casualties from the police side.

The Police boss told journalists in Katsina that the operation was carried out by armed robbers.

However, addressing reporters at the 3 Brigade headquarters yesterday, the Commander, Brigadier-General Illyasu Abba revealed that three soldiers and four terrorists lost their lives during several hours of gun duel.

Brigadier-General Abbah during his briefing in Kano also noted that four terrorists were arrested, while several fleeing others sustained different degrees of bullet wounds during the cross-fire.

Brigadier-General Abbah’s full sattement: “in keeping with the tradition of 3 Brigade, Nigerian Kano of updating residents within its area of operational responsibility on the fight against terrorists and criminal elements, the Brigade states as follows, on 16 May 2013 at about 2130 hours, members of the terrorists sect coordinated simultaneous attacks in Daura Local Government Council of Katsina state, on the Area Command of the Police and the Divisional Police station.
“The terrorists proceeded to rob four banks; however, troops of 35 Battalion responded to distress call and made gains against the terrorists. At the end of the encounter with troops which stretched up to Dutsi along Mani Road, four terrorists lost their lives while a good number of them sustained gunshot wounds. Three soldiers also lost their lives in the shootout while others sustained injuries.
“The Army boss, however, appealed to the general public to cooperate with security agencies by divulging timely information on the activities of the militants, “headquarters of 3 Brigade and, Nigerian Army and all its units within its area of operational responsibility of Kano, Katsina and Jigawa states would like to assure residents that it is ready to respond to these threats.

“The three states may likely experience influx of persons with criminal tendencies fleeing the North-East, “where military operations are ongoing to root out terrorist s operating within the zone. The Brigade would also like to advice financial institutions with outstations outside of the state capitals to always leave minimal unattractive cash in their vaults at the end of business as the terrorists are in need of cash.

“There may be likelihood of house-to-house search; but the success of such operation will depend largely on the cooperation of the people, because the terrorists that attacked Daura were so many as the switched off all the security lights in Daura before carrying out their operation.
“The irony of it all was that when the terrorists invaded Daura, they started shouting Allahu Akbar, Allahu Akbar, Allahu Akbar, as children joined them to chorus it as they carried out their operations.”

CP Magaji, however, claimed that his Command also killed four of the gun men that attacked banks and police stations and also recovered four AK 47 and four IDEs.

“Yesterday (Thursday) around 10:00 p.m, we received an information that some armed robbers were attacking banks in Daura town. When I received this message I tried to connect all the DPOs within the area at the same time dispatched armoured personnel carrier and other vehicles that could rescue the situation.

‘”These hoodlums are armed robbers, I therefore urged people in the community to be wary of strangers and report any person of suspicious movement. The police are always ready to ensure protection of lives
and property and we are on trail of the fleeing hoodlums’ he stressed.

“Most people ran into the bush when the shooting and the bombing started. I believed they came in about ten cars and they overwhelmed the security in the town. In fact everybody was on his own during the attacks by the hoodlums who are armed robbers. I therefore urge people in the community to be wary of strangers and report any person of suspicious
movement. The police are always ready to ensure protection of lives and property and we are on the trail of the fleeing hoodlums.” P.M.NEWS, however, learnt from residents that the Sabon Gari Police station in Daura was also burnt down by the terrorists during the attack.